Having put up my post which commented on the fall of the Bastille I saw on Hermeneutic of Continuity this really rather splendid photograph of the west front of Rheims cathedral. I have never visited Rheims, and would dearly like to. From the pictures I have seen I have always considered it one of the most beautiful of all the great medieval cathedrals of the heartland of the Kingdom of France. It is also, of course, the traditional place for the coronation, the sacre, of the Kings of France. 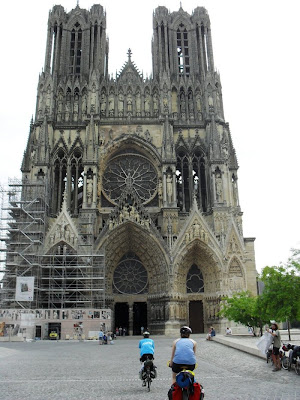 I thought I would share the photograph with you, and share the thought that a society that can produce so marvellous a building, and all that it denotes about historic France, is somewhat to be preferred to one that can produce monstrosities such as the Arc de Triomphe, the Pompidou centre and the archway at La Defense. More than somewhat to be preferred in fact.
Posted by Once I Was A Clever Boy at 09:55

Well, be fair: it's not as if post-Revolutionary France hasn't managed to produce any Christian architecture of note. Take Le Corbusier's monastery near Lyon...

Hmmm... I forget the point I was trying to make.

It's not so much Christian architecture I had in mind - Sacre Coeur is certainly impressive - the point I had in mind was the patronage, and indeed the intent of the patronage, by the French state.
Having mentioned the basilica at Montmartre one of the things which struck me when I visited it - apart from the obvious profound silence and devotion - was the decoration of the apse - King Louis XVI and Queen Marie Antoinette with their family being ushered into the Divine Presence. Something of a rebuke to the politicians of the republic in the city below.