I recently came upon a post by the always lively and informative website of The Tudor Travel Guide about ‘The Three Brothers’. This was a spectacular piece of jewellery consisting of three large rubies and a pointed diamond, originally made in the late fourteenth century for the Dukes of Burgundy. Subsequently  bought by King Edward VI it is shown being worn in portraits by both Queen Elizabeth I and by King James I and VI. It was eventually sold it would seem by Queen Henrietta Maria to help fund the Royalist war effort in the Civil War and disappeared, the constituent pieces presumably recut and reset. The article can be seen at  'The Three Brothers': The Most Coveted Jewel in Renaissance Europe
Sir Roy Strong writes about the piece and its history in his book Lost Treasures of Britain. 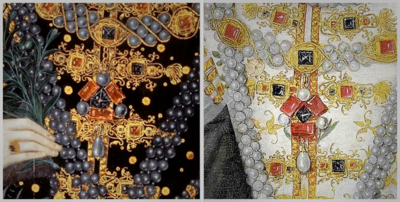 Detail of the Three Brothers jewel as worn in two portraits of Queen Elizabeth I
Image: Wikipedia
Looking further on the Internet I found what is, I think, a more detailed account on Wikipedia and which can be seen at Three Brothers (jewel)
The Tudor Travel Guide offered a forthcoming post about a similar piece of jewellery, created for King James I and VI and called the ‘Mirror of Great Britain’, a conscious celebration of the Union of the Crowns. I have not found that post so far. This jewel suffered a similar fate to the ‘Three Brothers’. It too was also discussed by Sir Roy in his book and Wikipedia has an account of the piece which can be seen at Mirror of Great Britain.
The history of one of its constituent jewels can be read in the Wikipedia article on the Great H of Scotland
From the Mirror itself the one identifiable jewel today is the Sancy diamond which became part of the French royal collection and which has returned to France in recent decades. It can now be seen in the Louvre. The history of this particular gem is set out in Sancy, again from Wikipedia
To be honest the interest of these two pieces of jewellery is historic rather than aesthetic - to the eye of later centuries they probably appear massive and showy, but not particularly appealing to the eye. Large stones cut in an angular way without the facetting of modern jewellery lack the appeal of pieces of more recent creation. There is nothing of the delicacy of other surviving pieces from the later middle ages or the sixteenth century. Ironically had they survived - and they are undoubtedly a loss - they might appeal to a more modern fashion sense than other jewellery heirlooms.
Posted by Once I Was A Clever Boy at 19:06