King Charles I leaves Oxford in 1646

375 years ago on April 27th 1646 King Charles I left Oxford, which had been his base and acting capital since the autumn of 1642 after Edgehill. For much of the time the Civil War can be seen as an attempt by the King to recover London, and by the Parliamentarians to capture him, rather like seeking a checkmate in a deadly game of chess. With the area of England under his control reduced to a corridor stretching from Oxford, now under ever increasing threat from the Parliamentary forces, northwards to Newark, where the Scots were besieging the castle, the King set other options aside and finally resolved to place himself under their protection. 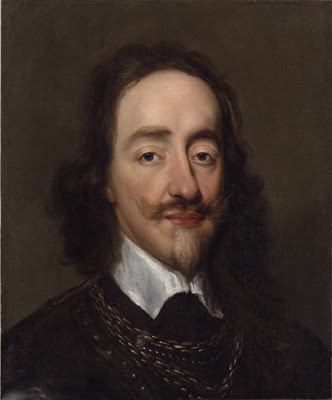 King Charles I
Painted in Oxford during the Civil War by William Dobson (1611-46)
For more about the portrait see Philip Mould | Historical Portraits | King Charles I | William Dobson
Image: historicalportraits.com
The background to the King’s decision to escape before Oxford fell to the Parliamentarian forces, the negotiations conducted through intermediaries and the preparations for the journey, together with something of the fugitive monarch’s circuitous journey in disguise, can be read in Wikipedia articles at Siege of Oxford and Charles I's journey from Oxford to the Scottish army camp near Newark
There are biographies from Wikipedia of the King’s two companions at Michael Hudson and John Ashburnham
It has been suggested that the choice of Harry as his alias was a reference to the King’s long dead elder brother Henry Prince of Wales. I have commented about my sense that the memory of the glittering elder brother and his unrealised potential was a constant and questioning presence in the life of King Charles in my 2012 post Henry Prince of Wales
Disguise as a servant was to become the stuff  of Stuart legend - in 1651 King Charles II was to pose as Jane Lane’s groom and in 1746 Prince Charles Edward as Flora MacDonald’s maid Betty in their successful escape from pursuit.
The journey took the party of three as far towards London as Hillingdon and then towards Kings Lynn, and then to Stamford and arrived at Southwell on May 5th.
As part of the route across country and through territory under his opponents control it is said that the King contrived a visit to the then desolate Little Gidding, the home before the Civil War of Nicholas Ferrar and his community. It is this visit that T. S. Eliot refers to in his wonderfully charged poem about the enduring fascination of this small Huntingdonshire village :

It would be the same at the end of the journey,

If you came at night like a broken king,

If you came by day not knowing what you came for,

It would be the same, when you leave the rough road

And turn behind the pig-sty to the dull facade

And the tombstone. And what you thought you came for

Is only a shell, a husk of meaning

From which the purpose breaks only when it is fulfilled

If at all. Either you had no purpose

Or the purpose is beyond the end you figured

And is altered in fulfilment. There are other places

Which also are the world's end, some at the sea jaws,

Or over a dark lake, in a desert or a city--

But this is the nearest, in place and time,

Now and in England.

If you came this way,

Taking any route, starting from anywhere,

At any time or at any season,

It would always be the same: you would have to put off

Sense and notion. You are not here to verify,

Instruct yourself, or inform curiosity

Or carry report. You are here to kneel

Where prayer has been valid. And prayer is more

Than an order of words, the conscious occupation

Of the praying mind, or the sound of the voice praying.

And what the dead had no speech for, when living,

They can tell you, being dead: the communication

Of the dead is tongued with fire beyond the language of the living.

Here, the intersection of the timeless moment

Is England and nowhere. Never and always.

Eliot’s poem is about many things, not least his own spiritual and cultural progession, but in it one can see also not merely the physical journey of King Charles but his inner journey to become the Royal Martyr.
Posted by Once I Was A Clever Boy at 01:00