Reaction to my Hungarian Heraldry lecture

A few weeks ago I gave advance notice on this blog that I was going to give a talk to the Oxford University Heraldry Society entitled “Hungary Ancient and Hungary Modern: An Heraldic History of the Crown and Lands of St Stephen” on April 8th. That talk has now been delivered, and, thanks to illustrations assembled by a friend into an effective PowerPoint display, went well. It was delivered by Zoom, which meant we had something like fifty attendees. This was more than we usually get and meant that OUHS can link up with other Heraldic groups. That is surely a positive development. From the feedback I have had the talk was a success.
One such response was shared with me from the blog of the Heraldic Society of Scotland which I am copying and sharing as it says nice things about me, but also, and more importantly, comments on one of the images I used, and shows how heraldic art can also be used as striking political comment. It is entitled  Thanks to OUHS :

Many thanks to OUHS secretary, Priscilla Frost, for inviting us to attend an excellent lecture this evening by John Whitehead of Oriel College on "Hungary Ancient and Hungary Modern. The Crown and Lands of St Stephen." This was a tour-de-force of scholarship. One highlight for the present writer was the image of heraldry used as protest.

Here are the arms:

Traditionally the bars Argent refer to the four rivers the Duna (Danube), Tisza, Dráva, and Száva.

In 1920 this poster of protest appeared: 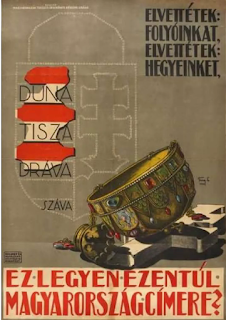 The religious and royal elements are cast down and the legend "You have stolen our rivers, you have stolen our montains." is added with the spoiled bars Argent replaced by the names of the rivers. The message in red asks if this should now be the national coat of arms.

Hungary's assent to the Treaty of Trianon on 4 June 1920 ratified the decision of the victorious Entente powers to re-draw the country's borders. The treaty required Hungary to surrender more than two-thirds of its pre-war territories. Irredentism—the demand for return of lost territories—became a central “Maimed Hungary” theme in national politics. The mutilation of the ancient coat of arms captured this idea most effectively.

The Oxford University Heraldry Society lecture series continues and we are all welcome to sign up to join:

The next lecture is on May 6th at 6.30 on Heraldry and the Mayflower.