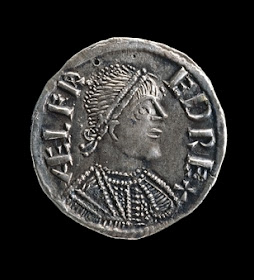 King Alfred on a penny minted in London
Image: harvardepiscopal.blogspot
Late in April 871, and after Easter, but on an otherwise unrecorded day King Aethelred I of Wessex died and the crown passed not to his young sons but, by agreement, to his sole surviving and younger brother, Alfred. Thus 1150 years ago the fifth of the sons of King Aethelwulf, and the fourth in turn became King. For the twenty two or three year old new King, who never enjoyed good health, although a keen huntsman, and already possessing military experience his inheritance was not an easy one. In the preceding years since 867 the Danish invaders had swept away the Anglo-Saxon realms of Northumbria, East Anglia and Mercia, replacing them at best with puppet rulers as in Mercia, at worst by martyring St Edmund in East Anglia.
The early years were to prove testing , including the young King having to find refuge in the Somerset marshes at Aethelney ( and famously burning the cakes - silly what people remember is it not ) and then leading a counter-offensive.
From that the King successfully negotiated with the Danish leader Guthrum, secured his conversion to Christianity, and added half of Mercia to his territory.
Now, he was greatly loved, more than all his brothers, by his father and mother—indeed, by everybody—with a universal and profound love, and he was always brought up in the royal court and nowhere else...[He] was seen to be more comely in appearance than his other brothers, and more pleasing in manner, speech and behaviour...[and] in spite of all the demands of the present life, it has been the desire for wisdom, more than anything else, together with the nobility of his birth, which have characterized the nature of his noble mind.
From Asser’s biography of King Alfred
In the peaceful years that followed he improved the defensive system of Wessex, began to be able to use a navy against invaders, produced a law code, and began his remarkable initiative to educate the elite of his realm by commissioning and translating himself texts useful to churchmen and lay administrators alike. When young he had twice visited Rome and thus travelled across the Frankish kingdom, and in adulthood had contact with and interest in Jerusalem, the Baltic, Wales and Ireland. A clever child he had memorised texts so as to win a book from his mother, although not learning to read until 12. He carried a pocket book of notes and prayers and at the age of 38 learnt Latin to enable him to translate more books. Alongside this, though tragically little survives, was a rich artistic style, exemplified by the coin illustrated above and, most famously, in the Alfred Jewel now in the Ashmolean Museum.

The Alfred Jewel
Image: Ashmolean Museum
When conflict was renewed with the Danish invaders King Alfred and his people were far better placed to resist and to hold the initiative.
By forcing traders into the largely abandoned area within the walls of Roman London he began that relationship between the government and what was to rapidly become the commercial centre of the kingdom.
In all this  he remained a prayerful ruler who tried to attend the daily office and who exemplified a vision of Christian kingship. When he died in the autumn of 899 aged about fifty the foundations were well and truly laid for the creation of a single English monarchy, achieved under his grandson King Athelstan (924-39) and great-grandson King Edgar (958-75), and for the concept of King Alfred “the Great”.
Later anachronistic presentations of him as a philosopher king and ‘founder of the Royal Navy’ - both not untrue but the reality was not as presented in Victorian art and letters as both a Gladstonian Liberal and a Disraelian Imperialist - actually obscure how remarkable he was, a serious, dedicated ruler who disproves in his own words and in those of his friend and biographer Bishop Asser, our still too prevalent but outdated and limited preconceptions about Anglo-Saxon and “Dark Age” life and realities. A century or so before King Alfred became known as “the Great” his descendent, himself probably seriously misunderstood, King Henry VI wrote in 1441 to Pope Eugenius IV seeking the canonisation of him as St Alfred. Even if nothing came of that the initiative it shows how he might be viewed.
Wikipedia has a good account of his life at and achievements at Alfred the Great and Asser’s biography, together with related documentary sources, is available from Penguin, and as an item on Kindle.
Sir Arthur Bryant wrote that the inscription on the Alfred Jewel “Alfred ordered me to be made” could be applied to England. Not a bad summary of the achievements of the young man who became King 1150 years ago.
Posted by Once I Was A Clever Boy at 20:49