The Enthronement of Bishop Richard Fleming in 1421

Today is the 600th anniversary of the enthronement of Bishop Richard Fleming - ‘my’ Bishop and the original ‘Clever Boy’ - in his cathedral church at Lincoln in 1421.
Fleming had been appointed to Lincoln and personally consecrated - “with wonderful piety” as the Bishop recalled later for his epitaph - a year earlier in Florence by Pope Martin V, whom he had served as a Chamberlain. He had returned to England that year but it was not until this day that he was actually enthroned in his cathedral.
Although Lincoln has a spectacular series of stalls for the canons from the late fourteenth century the bishop’s throne of that era has long gone, and the present one is a not especially successful attempt from the nineteen century to match them.
The enthronement of a medieval Bishop was not only a grand occasion in ecclesiastical matters but also in secular one, the new diocesan being seen as the feudal superior of his estates which stretched across the diocese to Oxfordshire and Buckinghamshire. The diocese comprised not only Lincolnshire but Rutland, Leicestershire, Northamptonshire, Huntingdonshire, Bedfordshire, Buckinghamshire, Oxfordshire and a large part of Hertfordshire, and was probably the most populous in England, with prosperous towns and countryside, adorned with fine parish churches, numerous monastic foundations and the University in Oxford. The economy might be changing and there might be Lollards in known places, but as a diocese it was an impressive testimony to the spiritual and administrative life of the medieval English church. This achieved its ultimate public expression in the cathedral at Lincoln.

Engraving by Wenceslaus Hollar from the seventeenth century showing Lincoln Cathedral from the north and before the fall of the central spire in 1548, which made it the tallest building in the world. The two on the western towers survived until 1807. The Chapter House is in the left foreground.
Image: art.famsf.org
For the occasion we know that as a Lincolnshire landed figure the head of the Mowbray family, the Earl Marshal and also of Nottingham provided new liveries for his retainers on this occasion. To mark the day there was a feast in the Palace for which the menu survives in Two Fifteenth Century Cookery Books (EETS) 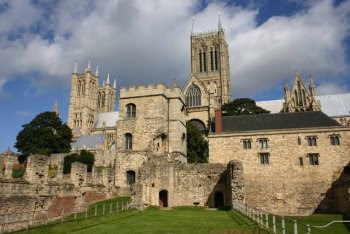 The Bishop’s Palace at Lincoln
The remains of the Great Hall are on the left with a second range in the foreground. The central gate tower and lost range to its right were built or rebuilt by Bishop Alnwick in the years after 1436.
Image: explorelincolnshire.co.uk
Such preparations were not just in honour of the new Bishop but for his principal guest, King Henry V and his entourage.
of honour King Henry V - water route from Pontefract - King Henry V
Image:historic-uk.com
The King had been on a tour around the realm, accompanied for part of the time by his new Queen Catherine, who at about this time became pregnant with the future King Henry VI. The visit to Lincoln came after time in Yorkshire, with two shrines favoured by the King to St John of Beverley and St John of Bridlington. It was probably on the last stage of this that news arrived if the defeat and death of  the King’s brother and heir Thomas Duke of Clarence at Baugé on Easter Eve, March 22nd.
The King had been at his Lancastrian ancestral castle at Pontefract and travelled, as his itinerary reveals, by water along the rivers Aire, Ouse - with an overnight stay with the Bishop of Durham on his Howdenshire estates - and Trent and, presumably, the Foss Dyke to Lincoln.
The King’s presence at the enthronement is interesting. He was notably devout and was certainly already acquainred with Fleming. As a gesture of support it may be noteworthy and one reason may be that the new diocesan wanted royal support for his attempt to bring peace to the troubled Chapter at Lincoln. Disputes there have rumbled on across the centuries, but Fleming was attempting to strike a balance between the canons - of which he had been one as Prebrndsry of Cropredy - and the seemingly cantankerous Dean John Mackworth in s long running series of disputes.  Having heard Fleming make his award the King asked if all concerned were content. To this they all replied in the affirmative. The agreement was witnessed by others from outside the Chapter, including Fleming’s brother-in-law, the long standing Lancastrian retainer, Robert Waterton, and all may have been seen to be resolved. This may have been one reason Fleming was doubtless pleased to welcome the King to Lincoln.
However no sooner had the King departed back to France and the new Bishop moved on around his diocese than the Dean and Chapter resumed their feuding. That was not finally ended until Fleming’s successor but one, Bishop William Alnwick (1436-49) - who as the King’s Secretary may well have been present on this day in 1421 - produced his review of the cathedral statutes and issued his Laudum which regulated such matters successfully - or as well as it could until Mackworth had gone to his eternal reward. It has remained as the guide for the Chapter until the General Synod in its wisdom (sic) legislated nationally to create new regulations after the most recent clerical spat at Lincoln in the 1990s....

King Henry V on his visit oversees the award as to the Chapter of Lincoln.
Stained glass by Clayton and Bell 1874 in the Chapter House, Lincoln Cathedral
Image: Flickr
Posted by Once I Was A Clever Boy at 22:49

Addendum: When writing about the Earl Marshal and his retinue at the enthronement I mentioned his earldom of Nottingham but forgot to mention that he was also Earl of Norfolk. His life is recounted on Wikipedia at John de Mowbray, 2nd Duke of Norfolk - a title to which he was restored in 1425.