Our Lady on the Bridge at Wakefield


Today’s Marian shrine on the spiritual pilgrimage, the Chapel of Our Lady on the Bridge in Wakefield is one in which I have a personal interest as I was born about a mile away, just up the road on the site of the battle of Wakefield, which was fought in 1460. It was on the day I had been at a conference in the chapel in 1993 about its place in the architectural history of medieval Yorkshire that I heard I had a place at Oxford. It is also a building which ‘my’ Bishop Fleming would have passed every time he went in or out of Wakefield, as he must surely have done, from his home village of Crofton in the 1390s.

The Chapel is, I think it not unreasonable to suggest, is the great architectural treasure of Wakefield, which is not to discount the fine late medieval parish church which has been an Anglican cathedral since 1888 and some fine Georgian buildings, notably in the St John’s area.


Built along with the bridge over the Calder between 1342 and 1356, when it was licensed for two priests, it displays, above all in its west front, a remarkable sophistication for a wayside chapel. The links between the parish church in Wakefield and the Chapel of St Stephen at Westminster and the patronage of the last of the Warrene Earls of Surrey, the local magnate, may have been an influence here. The foundation was not, as used to be supposed by some, to commemorate the battle in 1460. However the death of the Earl of Rutland did apparently occur nearby, which led to a number of sentimental Victorian engravings after Shakespeare’s tear-jerking narrative with the chapel in the background. 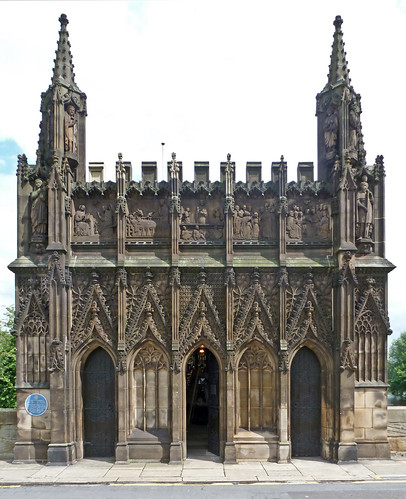 The restored west front of the Chapel
Image: Tim Green on Flickr

J.W.Walker’s monumental History of Wakefield prints an inventory of the chapel’s goods in the sixteenth century include copes for the statue of the Virgin to wear on appropriate feasts. Today the chapel still has the niche - whether original or Victorian - to the right of the altar for such a statue. This inventory is evidence for such dressed statues in late medieval England. An inventory for the parish church on the hillside above does record there that almost ubiquitous late medieval relic of Our Lady’s girdle - bestowed by her upon St Thomas at the Assumption - which points to a tradition of Marian devotion in the town. 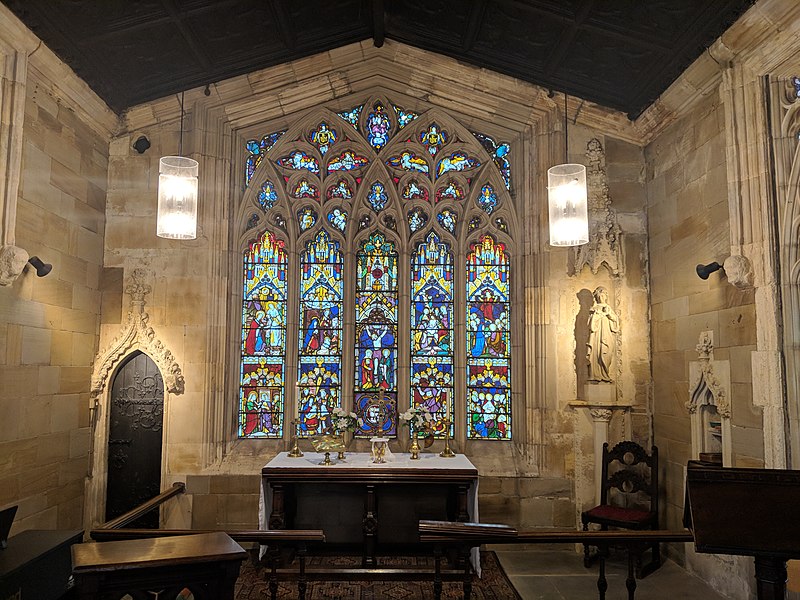 The interior of the chapel
Image: Wikipedia

Like other such bridge chapels it has had a somewhat troubled history since the 1548 suppression of the chantries. It was extensively restored - more or less entirely rebuilt - in 1847. The original front was sold off as a garden feature and seriously vandalised in the 1990s before being rescued and re-erected by the local authority. Due to th wrong stone being used the new front on the chapel rapidly decayed and had to be replaced in 1939. By the 1980s with the Victorian parish of which it was the beginning merged with another that could give it little attention its future looked unclear, for all that it has become one of the symbols of the city. The foundation of a group of Friends helped to raise funds and further restoration has taken place. In those days I used to think that placing it under the Cathedral would be a better future for it, maybe as a centre for Walsingham devotions in a diocese noted for sustained interest in the Norfolk shrine. Great minds obviously do think alike and in 2000 the chapel, under a parish boundary change, was transferred to the Dean and Chapter of Wakefield.

The Wakefield Cathedral website has a useful section on the chapel with a fine slide show of pictures of it over time at its masthead, which can be seen at A History

Wikipedia has a good article on the chapel at Chantry Chapel of St Mary the Virgin, Wakefield

There is a more detailed account of the building, of the fate of the original front and the similar, if less elaborate, bridge chapel from the 1480s at Rotherham at Bridge Chapels - Edward Green and there is another detailed architectural account at Visual Analysis and Phased Interpretation of Chantry Chapel, Wakefield

Our Lady of Wakefield Bridge, pray for us