Our Lady of Doncaster


Today the virtual Marian pilgrim turns south-east to the shrine of Our Lady of Doncaster. Here again I must declare an interest - my father came from Doncaster, and when I was growing up it was where my Catholic relatives lived.

The medieval shrine was in the Carmelite priory, initially founded in the town in 1346, and which acquired what became its permanent home in 1350. As a building it was used as a suitable residence by visiting monarchs and their families on their visits to the town. The house, along with the town’s Franciscan friary, was suppressed in 1538. Today the site is occupied by the Mansion House - a great eighteenth century symbol of Doncaster - and the Post Office on the south western side of the High Street. Until the end of the 1950s that was still the Great North Road, right through the town centre.

Nothing remains above ground of the Carmelites’ buildings and the one tangible link to medieval pilgrimage is an inch square fragment of a pilgrim badge now in the museum in King’s Lynn. 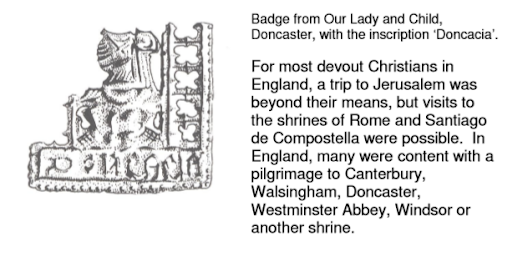 There is another useful history at The Priory and an article suggesting that Edward Balliol, the soi-distant King Edward I of Scots in the 1330s, who died in a village near the town in 1367, may have been buried in the church can be seen at Could Scots king be buried under the Post Office?

The shrine of Our Lady became one of the most popular places for Marian pilgrimage in the period down to the 1530s. The excellent Wikipedia account of the devotion to Our Lady of Doncaster, which includes a contemporary narrative of a miracle attributed to her intercession in 1524, can be seen at Our Lady of Doncaster

The modern Catholic parish of St Peter in Chains has another good account on its website at The Shrine of Our Lady of Doncaster which includes the story of the revival of the devotion to Our Lady of Doncaster from 1868 onwards. This was the first instance of the revival of a medieval English local Marian devotion. The shrine in the new church was dedicated by the great Cardinal John Heenan when he consecrated the building in 1973, as he had promoted the cultus as diocesan bishop in the 1950s. Between 2005 and 2008 the Shrine was completed and enhanced. The diocese of Hallam observes June 4th as the feast of Our Lady of Doncaster. 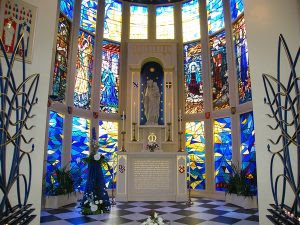 The modern Shrine of Our Lady of Doncaster. The statue dates from 1868.
Image: St Peter in Chains Doncaster

The British Carmelite Province also remember their involvement with the original shrine and their website has a piece about the devotion at Feast of Our Lady of Doncaster.

Our Lady of Doncaster, pray for us