Our Lady of Pity in the Galilee at Durham


Today the Marian spiritual pilgrimage moved to the site of the image of Our Lady of Pity in the Galilee of Durham Cathedral.

To many today the image of Our Lady of Pity is inextricably bound up with Michelangelo’s sculpture of 1499 in St Peter’s in Rome. That and similar works suggest that this is a quintessentially Catholic Reformation idea. The historical reality is rather different. To quote Wikipedia - which has a useful link in the passage - “The pietà developed in Germany (where it is called the "Vesperbild") about 1300, reached Italy about 1400, and was especially popular in Central European Andachtsbilder. Many German and Polish 15th-century examples in wood greatly emphasise Christ's wounds.” It was then a northern European concept which moved south, not the other way round. Late medieval England certainly shared in this tradition, as witnesssed by surviving alabaster carvings and in fragments of wall paintings as at Thame in Oxfordshire. It was perhaps a depiction which was sure to attract the ire of evangelical iconoclasts, and hence its rarely today in a medieval building.

The image at Durham indicated very much official endorsement of such piety. By at least 1410 the church at Hemingborough in Yorkshire - part of the Durham peculiar spiritual jurisdiction there - possessed an image of Our Lady of Pity. Thomas Langley, Bishop of Durham 1406-37 was also a prominent member of the King’s government until 1430, when he retired to directly administer his diocese - there is a short biography of him at Thomas Langley which suggests that maybe that it was at this point in his life that he paid attention to the Galilee Chapel at the cathedral. However he had founded his chantry chapel of Our Lady and St Cuthbert much earlier on June 18th 1414. He carried out an extensive series of structural repairs and re-ordering to create his own tomb and chantry in the centre of what was the cathedral Lady Chapel, flanked on the south by the shrine of St Bede and on the north by the apparently new chapel of Our Lady of Pity. The arrangement is reminiscent of the chapel of Our Lady of the Undercroft at Canterbury which Langley must have visited on his journeys.

The following section is adapted from the Victoria County History of Durham iii 1928 with additions from Rites of Durham...
The east side of the chapel has in the centre the great black marble platform of the Lady Altar erected by Bishop Langley, of which his tomb forms part, steps rising on either side of it to the altar platform itself. The opening of the west doorway was at one time filled by a painted wooden reredos of 15th-century date, which was unfortunately destroyed in 1845. It is described in Rites as having been “devised and furnished with most heavenly pictures... lively in colours and gilting, as that they did greatly adorn the said altar” and is shown in drawings made by Carter in 1795. The back of the reredos was divided into five panels, each of which contained a large standing figure with a smaller figure above. There were also side wings and a ceiling of wood divided into oblong panels.

The altar stood within the doorway opening, in the south jamb of which is a large recess which originally formed part of one of the 'two fine and close aumeryes' of wainscot at either side behind the portal. The mensa of the altar is now placed in the floor of the platform where the altar formerly stood. Langley's tomb is of blue marble and its top is quite plain, but round its moulded edge is a chase for an inscription in brass, now lost. The tomb projects some 6 ft. westward into the chapel, and at its west end are three panels each containing a large shield with the bishop's arms. The chantry chapel, or Canterie, in which the tomb and altar stood, occupied two bays of the middle aisle, a space of about 24 ft. by 13 ft., its floor raised a step above that of the Galilee, and enclosed each side by an open screen. Here was offered a daily votive Mass by the Master of the Song School and the choristers.

In the soffit, jambs and back of each of the recesses on either side of the doorway are considerable remains of painting, those in the northern recess being in a fine state of preservation. This painting, which is for the most part contemporary with the building, consists of a band of conventional leaf ornament running round the recess at the level of the springing, a larger pattern of similar nature on the soffit, and a panel on the inside face of each jamb; on the panels on the north and south sides respectively are figures of a king and bishop, probably St. Oswald and St. Cuthbert, in architectural canopies. The colours—green, blue, red and yellow, with dark brown outlines— are still very fresh, and the figures are boldly and effectively drawn in the finest style of 12th-century painting, in round arched niches with masonry towers in spandrels and apex.

The back of the recess, below the ornamental band, is occupied by a painted representation of hangings, or looped drapery, with borders at top and bottom, but the middle part on which no doubt was the picture of Our Lady “carryinge our Saviour on her knee, as he was taken from the cross, a very dolorous aspect” is now completely defaced. This drapery, which is of a pale yellow colour, is probably of later date than the rest of the painting, but is certainly not post-Reformation. 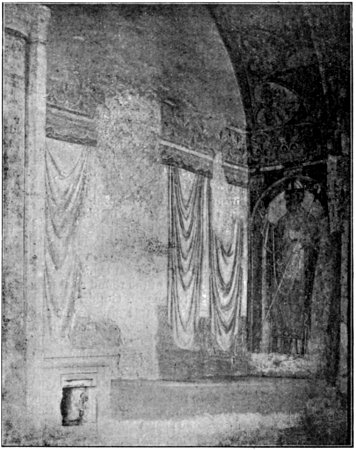 The site of the altar of Our Lady of Pity
Image: ajhw.co.uk from J.E.Bygate The Cathedral Church of Durham Bell’s Cathedral Series 1905

The full text of Rites of Durham can be read in a scanned version at Rites of Durham, being a description or brief declaration of all the ancient monuments, rites, & customs belonging or being within the monastical church of Durham before the suppression (Surtees Society 1903).

Our Lady of Pity, pray for us