On May 29th 1660, 360 years ago, on his thirtieth birthday, and in the twelfth year of his reign, King Charles II entered London on what came to be seen thereafter as the formal date of the Restoration, rather than the vote in the Commons calling him back on May 8th or the King’s landing at Dover on May 25th. 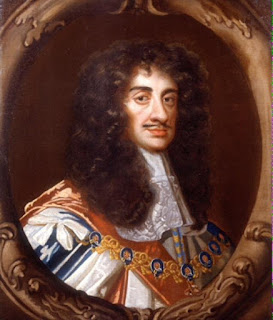 There is a very readable article from three years ago by Ian Mortimer about the Restoration and its impact on the life of the realm and all the King’s subjects, arguing that we underestimate its far-reaching significance. It can be read at 1660: The year that changed everything

The Court culture of the Restoration is well summarised in a glowing review of the exhibition two years ago at The Queen’s Gallery from The Guardian which can be seen at Charles II: Art and Power review – crowning glories of a royal passion

Traditional celebrations of Oak Apple Day are covered in another article, this time from Country Life five years ago, entitled Bring back Oak Apple Day

That sentiment is one I heartily endorse, even if this year it is impractical, but would argue that, rather as the theme of Ian Mortimer’s article, there is something here than can unite Crown and people in a shared celebration of history and identity. It is in some ways very understated in its expressions, or slightly eccentric, but it springs from impulses that are far older than 1660. To make more of it would be good, and be a way of expressing gratitude for all that the Restoration did restore, for an institution at the heart of the nation that we take too easily for granted. Being who we are as a people it would also be genuinely of the people, and not the assertive strident celebration of nationhood that some other countries feel obliged to have on national days - but then they lack monarchs.

A Happy Oak Apple Day to you all!