Our Lady of Abingdon


Today the Marian Spiritual Pilgrimage reaches Abingdon and the site of the great medieval abbey there. 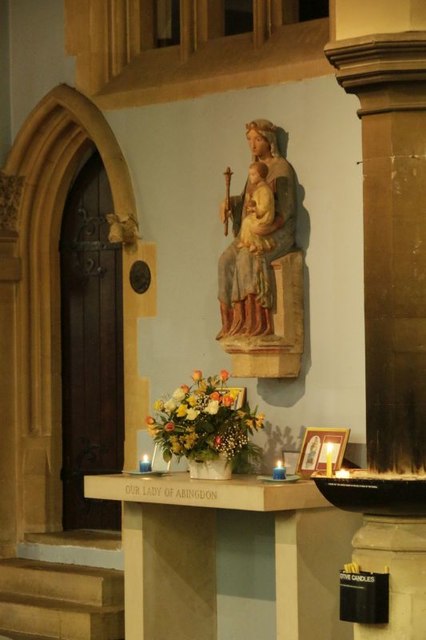 Our Lady of Abingdon
© Copyright Bill Nicholls and licensed for reuse under this Creative Commons Licence.

St. Edward the Martyr, King from 975-78, and St. Dunstan, Archbishop of Canterbury, who died in 988, both encouraged pilgrimage to the shrine of Our Lady of Abingdon, according to the Catholic Encyclopedia list of medieval Marian shrines and accessible on the New Advent website. Our Lady of Abingdon had a considerable repute, but seems to have left less than most in the historic record. 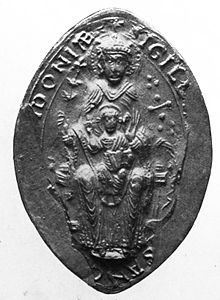 Another abbey seal, belonging to John Sante, Abbot from 1468-96, and involved in the Lambert Simnel uprising in 1487. The Virgin and Child are shown standing between SS Peter and Paul.
Images from VCH Berkshire II and Wikipedia

However despite the almost total destruction of the Abbey after its dissolution in 1538 it may be that a statue, if not the principal one, of the Virgin and Child from it survived.

When the ‘Sow and Pigs’ public house, in Culham, was demolished in 1913, and, in the gable end of the building was found a very large stone, which was placed on a rockery in the grounds of Culham House. Some years afterwards that property was acquired by Mr. Geoffrey Houghton-Brown, who realised that the large stone was a mutilated statue of Our Lady, which presumably came from Abingdon Abbey. He gave the statue to the parish priest of Abingdon, who put it standing in the side chapel of St Edmund in the church where it remained for a number of years with a notice hanging round the remains of its neck, giving something of its history. To commemorate the centenary of the re-opening of the Abingdon Mission, Canon Michael Sexton, the then Parish Priest, had the statue restored. This was undertaken by the sculptor Philip Lindsay Clark, in conjunction with a Benedictine monk from Farnborough Abbey, Dom Theodore Bailey, an expert in medieval art. The statue was then fixed to the wall to the left of the chancel arch and rededicated in 1957. Beneath the statue an altar was later erected.

Canon Sexton linked it to a shrine visited by many people on their way to a Sunnyg’s Well (Sunningwell) where people went hoping to be cured of blindness. 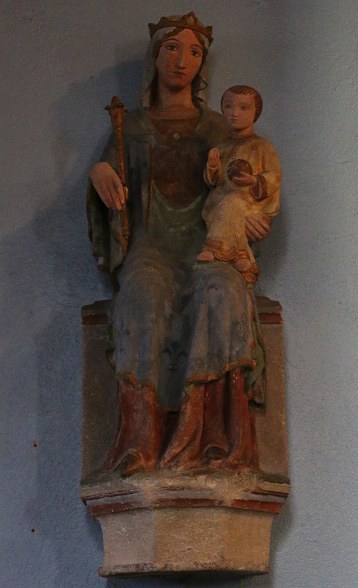 Today the statue and altar of Our Lady of Abingdon are to the left of the sanctuary in the church, and the focus of prayers to her.

With thanks to the church website https://www.ourladyandstedmund.org.uk/brief-history, to Abingdon Blog and the Isle of Wight Church History Society website.

Our Lady of Abingdon, pray for us