Our Lady of Thetford


﻿Today on Fr Hunwicke’s spiritual pilgrimage to the medieval shrines of Our Lady after visits to St Mary’s cathedral in Coventry ( the one destroyed in 1540, not the one destroyed in 1940 ) and to Our Lady of Grace in Ipswich - whence apparently comes the statue of the Virgin and, Child now honoured at Nettuno in Italy, and which has itself been reestablished in Ipswich in recent years - we come before Our Lady of Thetford.

I have to admit that this was a shrine of which I was unaware until this spiritual pilgrimage began, but a little research on the ﻿well documented history of the Cluniac priory of St Mary at Thetford in the Victoria County History of Norfolk bore ample fruit. The full history of the monastery from the VCH can be read at Houses of Cluniac monks: The priory of St Mary, Thetford.

I imagine that the story begins after the events of 1248, when the rule of notably dissolute prior was brought to a sudden end when he was stabbed to death by a monk of the house just outside the west door of the church...

A miraculous intervention about the middle of the thirteenth century had considerable effect upon the fortunes of the priory. The following is an abstract of the remarkable story, as told in the fifteenth century in a manuscript now at Corpus Christi College in Cambridge.

An artisan of Thetford, suffering from an incurable complaint, dreamt three times that the Blessed Virgin appeared, and told him that if he would regain his health he must persuade the prior to build a Lady Chapel on the north side of the church. When the prior heard the revelation he began to build a chapel of timber; but the man persisted that the Virgin should be honoured with a fair building of stone.

After some further revelations the prior set to work in earnest, and then a new marvel occurred. In their original home as a monastery on the other side of the water there had been, in the frater, a wooden image of the Virgin which the monks had brought with them to their new church; but in the course of time it had been removed to make way for one of greater beauty, and placed in a dusty corner. The thrifty prior thought that this old image would suffice for the new chapel, and it was handed over to the painter to be beautified. On removing the old paint from the head a silver plate came to light, and on its removal a hollow was disclosed wherein, wrapped in lead, were a variety of precious relics, with their names engraved on wrappers of lead. The more important of the contents were relics of the robe of Our Lord, of the girdle of Our Lady, of Our Lord's sepulchre, of the rock of Calvary, of Our Lady's sepulchre, of Our Lord's manger, of the sepulchre of St. John, and relics of SS. George, Agnes, Barbara, Vincent, Leger, Gregory, Leonard, Jerome, Edmund, Etheldreda, and parts of the grave-clothes of Lazarus. A letter was also found, addressed to Stephen the second prior of the house. He had been appointed in 1107 and oversaw the community’s move from their first home to the permanent site. He had been succeeded by 1131. The letter had been sent by William, minister of the church at Merlesham, who sent these relics, transmitted from the church of the Holy Sepulchre at Jerusalem, at the request of Hugh Bigod and a monk named Ralph.

When the relic-bearing image had been honourably replaced, the priory became the scene of miraculous cures. The author, the Thetford monk John Brame, gives the particulars of three, one of recovery of speech, and two of the restoration to life of children apparently dead. Pilgrims flocked to the priory, and as a result of their offerings a fine Lady Chapel was built on the north of the choir, the choir and presbytery itself was extended by forty feet, the frater was rebuilt on a larger scale, and five monks were added to the establishment. 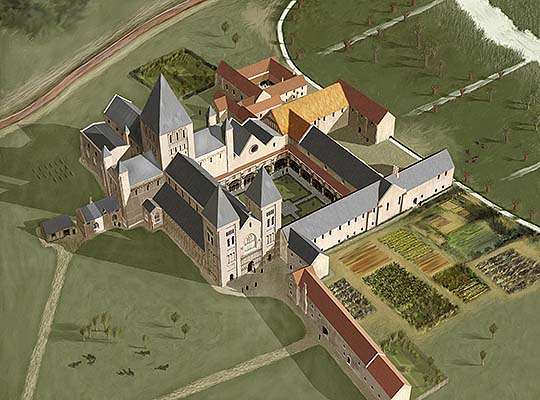 Aerial reconstruction drawing of Thetford Priory from the north-west, showing how it may have looked in 1540
© English Heritage - drawing by Richard Bond


I wonder if it was in the Lady Chapel. and before the miraculous image of Our Lady, that the third of the Mowbray Dukes of Norfolk and the second Howard Duke, his Duchess and King Henry VIII’s illegitimate son the Duke of Richmond and Somerset, whose wife was a Howard, were buried. The Howard Duke and Duchess and Richmond were moved, together with their monuments, at the dissolution in 1540, to Framlingham in Suffolk by the third Duke of Norfolk, who had attempted, in vain, to save the priory church at Thetford as a collegiate foundation.

There are pictures of the remains of the priory, a reconstruction of its appearance in the early sixteenth century and introductions to its history at Thetford Priory and at History of Thetford Priory.

Our Lady of Thetford, pray for us