Our Lady at the Pillar St Edmundsbury


Today the spiritual Marian pilgrimage returns to East Anglia with a virtual visit to Our Lady at the Pillar in St Edmundsbury. I must, in passing, say that the late Canon Stephenson’s booklet, the basis of Fr Hunwicke’s suggestion for this May devotion, does display a strange propensity to dash about England - it is clearly not designed as an itinerary for an actual pilgrimage! We have already been to the eastern counties and will conclude there after journeys to the midlands, south west and south east. I doubt if even in the pre-Beeching era when it was compiled that such a route would have been feasible. However the Spirit sets us free to travel hither and thither...

When I first saw St Edmundsbury on the list I assumed it referred to a shrine in the great abbey church but that it emerges is not the case. Consulting Edmund Waterton’s Pietas Mariana Britannica: A History of English Devotion to the Most Blessed Virgin Mary’s Mother of God (1879) I discovered that in the abbey church itself there was the main Lady Chapel to the north of the presbytery, another altar under her patronage bedind the High Altar and a third one in the crypt under St Edmund’s shrine.

However the one selected for this list from Waterton’s researches was not in the abbey church but in the nearby parochial one of St Mary. It was a specific image of Our Lady which had been painted by one Robert Pygot and which was to be set up on an existing base by a pillar alongside the parclose screen in the south aisle of the recently rebuilt church under the terms of the 1463 will of the great Bury benefactor John Baret. This phrasing reads more like a panel painting than a statue, and the will suggests it to have been the focus of prayer for the Nativity Guild. In addition Baret provided for his latten candlestick and a taper to be set before it and for “chymes to be sette abowt our Lady at the peler”.

St Mary’s is at the south west angle of the monastic enclosure. This is an impressive example of fifteenth century Suffolk church building, with a very fine angel hammerbeam roof. It was one of three churches on the boundary of the monastic precinct that served the townspeople: one has been destroyed and the third, St James, is now the very handsomely extended Anglican cathedral - well worth a visit to see what can still be achieved in the way of skilful traditional church architecture. 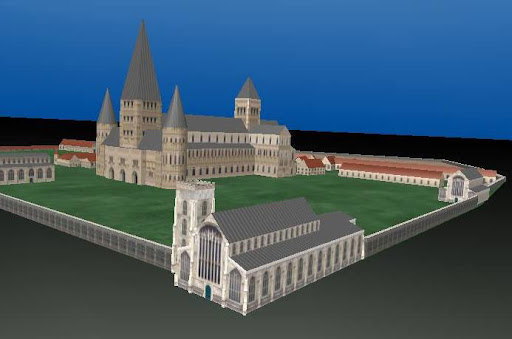 Our Lady at the Pillar St Edmundsbury, pray for us