Today the Marian virtual pilgrimage reaches Winfarthing in southern Norfolk. I think this is by far the strangest place on the course of the spiritual pilgrimage, and parts of the story of this East Anglian village seem like the setting for one of the ghost stories of M. R. James.

In the parish church in the late middle ages was a statue of ﻿Our Lady of Peace, and offerings at it are recorded. 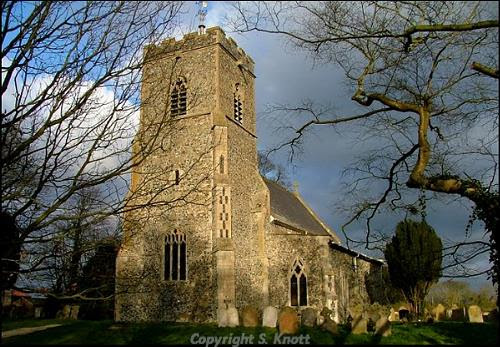 However Winfarthing had another object which drew the prayerful. Blomefield, the great county historian of Norfolk, in his account of the village published in 1805, quoting the sixteenth century Norfolk born reformer Thomas Beccon records that:

“Here was a clock formerly, which now stands disused in the south aisle; and in a chapel at the upper end thereof was placed a famous sword, called the Good Sword of Winfarthing, of which Becon, in his Reliques of Rome, (printed in 1563,) fo. 91, gives us the following account.

In Winfarthing, a littel billage in Norfolke, there was a rerteyne Swerd, called the Good Swerd of Winfarthyng, this Swerd was counted so prerious a relique, and of so great birtue, that there was a solemne pilgrimage used unto it, with large giftes and offringes, with bow makings, crouchinges, t kissinges: This Swerd was bisited far and near, for many t sundry purposes, but specialy for thinges that were lost, and for horses that were eyther stolen or else rune astray, it helpid also unto the shortning of a married mans life, if that the wyfe which was weary of her husband, would set a randle before that Swerd ebery Sunday for the space of a whole yeare, no Sunbay er cepted, for then all was bain, whatsoeber mas done before.

I have many times beard (says that author) when I was a rhild, of diberse ancient men and wemen, that this Swerd was the Swerd of a rertayne thief, which took sanctuary in that church pard, and after wards through the negligence of the watchmen escaped, and left his swerd behind him, which being found, and laid up in a rertaine old chest, was afterward through the suttilty of the parson and the clerk of the same parish, made a precious Relique, full of bertue, able to do much, but specially to enrich the bor, and make fat the parson's pouch."

I have left Blomefield’s transcription of Beccon uncorrected with its slightly odd typography - the odd use of b for v, h or p, r for c and t for &, is not too difficult to understand.

The sword is featured on both the modern village sign and stained glass in the church. The original is lost, and how efficacious it was is unquantifiable, so marriage guidance might be a better idea....

The Winfarthing sword does appear to be similar in its invocation to dispose of unwanted husbands to the late medieval appeal to ‘St Uncumber’, as it was known in England. This was the insular version of the rather curious cult of Wilgefortis.

Today Winfarthing is a small and rather obscure village but it appears from the discovery there in 2014 of a very significant early Anglo-Saxon Christian burial to have been a place of significance in the mid-seventh century. There is a discussion of this at An assemblage of Anglo-Saxon material from Winfarthing, Norfolk

Am I being unnecessarily tidy as a historian in wondering if all these stray things can be tied together - an early cult centre, perhaps pre-Christian in origin, that evolved into devotion to Our Lady alongside residual folk magic?

Our Lady of Winfarthing, pray for us