A new history of Syon Abbey

Given that today is the feast of St Bridget of Sweden I am not sure how providential or fortuitous it was that as I finished my voluntary shift this morning in the bookshop at the Oxford Oratory that I noticed on the shelves a copy of this new book by Professor Edward Jones about the great English Bridgettine monastery of Syon, and which is published by Gracewing at £9.99. 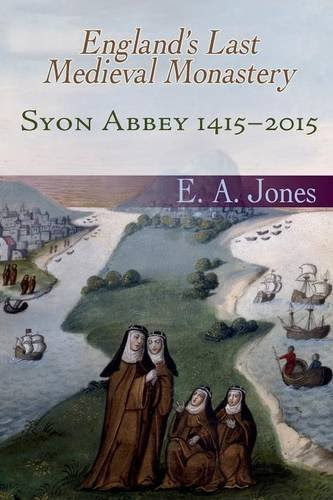 For those who do not know the story of Syon it can be summarised briefly as follows. In 1415 King Henry V - who was quite busy that year invading France - founded the only Bridgettine monastery in England. This was close to his palace at Sheen ( now Richmond) in Surrey and prospered until the reign of King Henry VIII. It was one of the mainsprings or wellsprings of late medieval English spirituality and devotion, influencing many members of the elite and beyond. The chaplain, St Richard Reynolds was one of the first martyrs of May 1535, and the house was dissolved four years later. Nothing daunted the Sisters went off to their family homes in groups and continued their common life. Returning to Syon in 1557 they were again dispersed in 1559, and left England with the retiring Spanish ambassador for Flanders. Forced by the Netherlandish revolt to seek refuge elsewhere they settled in Rouen until the victory of King Henri IV led this pro-Spanish community to seek refuge in Lisbon. There, always an English community in exile,they survived the Portuguese uprising against Spanish rule in 1640, the Earthquake of 1755, the Peninsular War, and desire some sisters leaving for England soon after the core community remained there until 1861 when they returned to England after more than three centuries. They settled first in Dorset and then Devon, latterly at South Brent. Tragically in recent decades the community has declined in numbers and they gave up their house in 2011 and now the two remaining sisters live the Bridgettine life within a home run by other religious in Plymouth.


Their archives are now at Exeter University where Prof Jones is based, and Exeter has made an important contribution to modern scholarship on this remarkable community.

From his book I discovered that one of the great treasures of Syon is now at the Catholic church at Heavitree near Exeter. This is one of the pinnacles from the original gatehouse at Syon, and presumably the one on which St Richard Reynolds head was impaled in 1535. This substantial relic has accompanied the sisters on their wanderings from Syon to Flanders, France, Portugal and back to England. They also, in token of ownership, retained the door key of the abbey buildings at Syon - the site now being occupied by Syon House, now the property of the Duke of Northumberland.

The book is handsomely illustrated and reflects academic research and the latest scholarship on the Order and the unique place of Syon on English Catholic history.

A book I am looking forward to reading at lenth and one which I would warmly recommend, and on a topic well worthy of study and reflection which I would also commend to anyone at all interested in the later medieval English Church, the reformation and in recusant history.

The one regret I have is that the book ends with the closure of the abbey, rather than its continuance and continuing prayer and witness.

May we join St Bridget in prayer for the sisters of Syon and all they represent.

Thank you for this posting. I look forward to reading the book. Recalling the Time Team programme on Syon, which indicatedthat the chapel rivalled Kings, Cambridge, I discovered this site
https://syonabbeysociety.wordpress.com/archaeological-evidence/
which has a useful summary and links.

I'll post this on my blog! What is the source of the cover illustration? Thank you.

I think it comes from the manuscript history of the Sister's removal to Flanders - others from the MS are reproduced in the book. I think the whole MS was reproduced in facsimile some years ago - I would need to check the details.