John Dillon posted a whole series of further images of St James the Great that are either late antique and medieval on the Medieval Religion discussion group site:

a) as depicted in the very late fifth- or early sixth-century mosaics (betw. 494 and 519) in the Cappella Arcivescovile at Ravenna:
https://www.flickr.com/photos/pelegrino/5779785736/

c) as depicted (fourth from left) in the earlier to mid-sixth-century mosaics of the presbytery arch (carefully restored, 1890-1900) in the Basilica Eufrasiana in Poreč:
http://tinyurl.com/pb9p2af

d) as portrayed in relief (at far left) on a leaf of the mid-tenth-century ivory Harbaville Triptych in the Musée du Louvre, Paris:
http://tinyurl.com/qdsovlz

e) as depicted in the earlier eleventh-century mosaics (restored betw. 1953 and 1962) in the narthex of the katholikon of the monastery of Hosios Loukas near Distomo in Phokis:
http://tinyurl.com/o8ujnz7

g) as depicted (lower register, center) in the mid-twelfth-century apse mosaics (completed in 1148) of the basilica cattedrale della Trasfigurazione in Cefalù:
http://www.wga.hu/art/zgothic/mosaics/3cefalu/4cefalu.jpg

k) as portrayed in relief in an earlier thirteenth-century enameled copper repoussé plaque of Limousin origin (ca. 1220-1230) from the high altar of the abbey church of Grandmont, now in the Metropolitan Museum of Art, New York:
http://www.metmuseum.org/collection/the-collection-online/search/464004

o) as depicted in a later thirteenth-century fresco in the circle of the apostles on the ceiling of the baptistery of Parma: http://www.cattedrale.parma.it/Img/voltabatt/61-giacomoM_Z.jpg

s) as depicted by the workshop of Simone Martini in an early fourteenth-century panel painting (ca. 1317-1320) in the National Gallery of Art, Washington, DC: 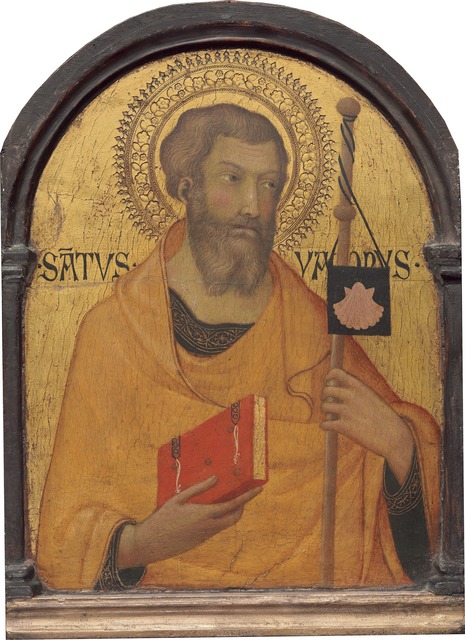 v) as portrayed in relief (third from right) on the late fourteenth- or early fifteenth-century tomb of St. Wendelin in his basilica in Sankt Wendel:
http://tinyurl.com/pepm5t9


w) as portrayed in relief in a fifteenth-century English alabaster in the Victoria and Albert Museum, London: 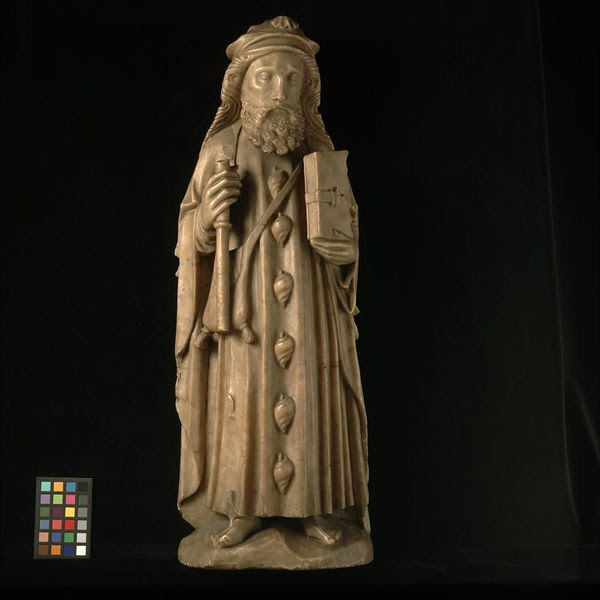 x) as depicted by Martino da Verona (attrib.) in an early fifteenth-century fresco in the chiesa di San Giacomo del in Vago di Lavagno (VR) in the Veneto:
http://tinyurl.com/ngmco3t

z) as depicted by Cosmè Tura in a later fifteenth-century panel painting (ca. 1475) from a dismembered altarpiece, now in the Musée des Beaux-Arts, Caen:
http://www.wga.hu/art/t/tura/polyptyc/st_james.jpg

aa) as portrayed in a later fifteenth-century limestone statue (betw. 1475 and 1500) of Burgundian origin in the Metropolitan Museum of Art, New York:
http://tinyurl.com/pr4hop7

cc) as portrayed by Gil de Siloe in a late fifteenth-century alabaster statue (ca. 1489–1493) now in the Metropolitan Museum of Art, New York. In 1486, Isabel of Castile, patroness of the explorer Christopher Columbus, commissioned an elaborate alabaster tomb for her parents, King Juan II of Castile and his Queen Isabel of Portugal. This star-shaped tomb, still standing in the center of the church of the Carthusian monastery of Miraflores, outside Burgos, was made between 1489 and 1493 by Siloe, a sculptor thought to be of Netherlandish origin. This statuette of the patron saint of Spain is known from old photographs to have been originally placed near the head of the Queen.: 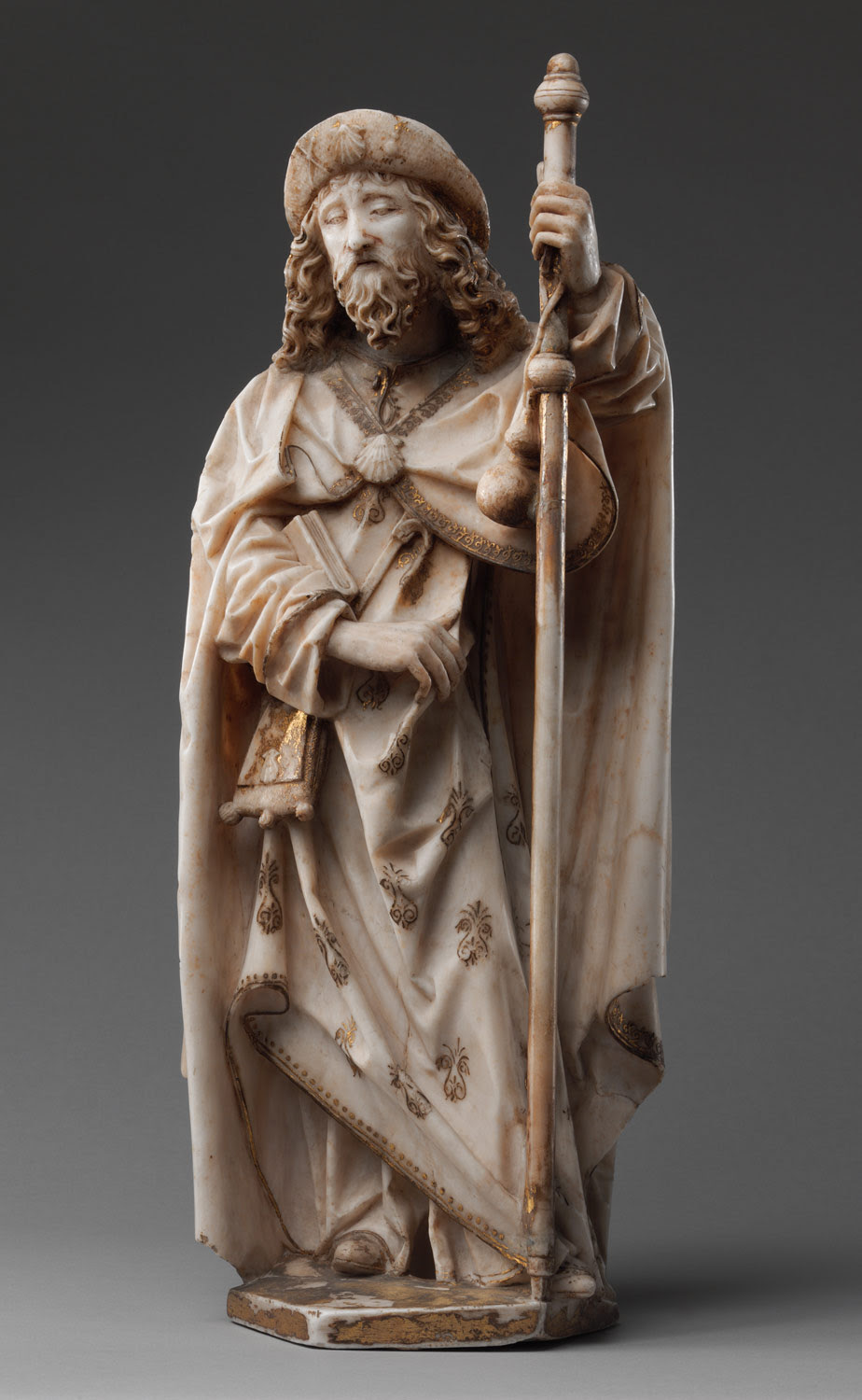 ee) as portrayed (third from left) in the very late fifteenth- or very early sixteenth-century statues of the apostles (betw. 1498 and 1509) in the south porch of the chapelle St.-Herbot in Saint-Herbot, a locality of Plonévez-du-Faou (Finistère):
http://tinyurl.com/ov8nw29

ff) as portrayed (seated) in an early sixteenth-century polychromed wooden statue (betw. 1501 and 1515) in the Deutsches Historisches Museum, Berlin: 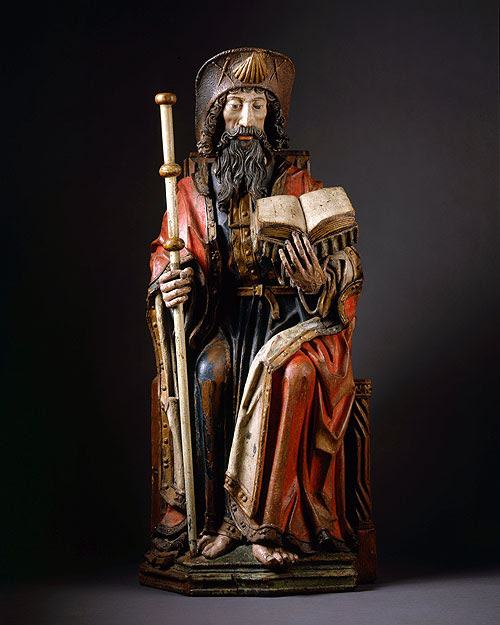