Today is the feast of St Mary Magdalene.

John Dillon posted these various medieval images of her on the Medieval religion discussion group site. They indicate the wide range of ways in which she has been depicted over the centuries, and the range of media in which she appears, as well as the differing skills and styles of individual artists and craftsmen. Devotion to her appears strong throughout the period, but it appears to have been very strong in the twelfth century, when her shrine at Vézelay was being built and attracting pilgrims; for that seethe online article Vézelay Abbey. By the later middle ages she appears often as a penitent clad in camel hair and with her hair flowing.

I have opened up for this post some of the links, but all are worth looking at - the size of some inhibits opening them all up, and the computer I am using is not very cooperative... :

a) as depicted (Noli me tangere; with another Mary) as depicted in a seventh-century icon in St. Catherine's monastery, St. Catherine (South Sinai governorate), Egypt:
https://iconreader.files.wordpress.com/2011/10/7thsinaichairete.jpg

b) as depicted (announcing the Resurrection) in a full-page illumination in the earlier twelfth-century St Albans Psalter (betw. 1120 and 1145; Hildesheim, Dombibliothek, MS St. Godehard 1, p. 51): 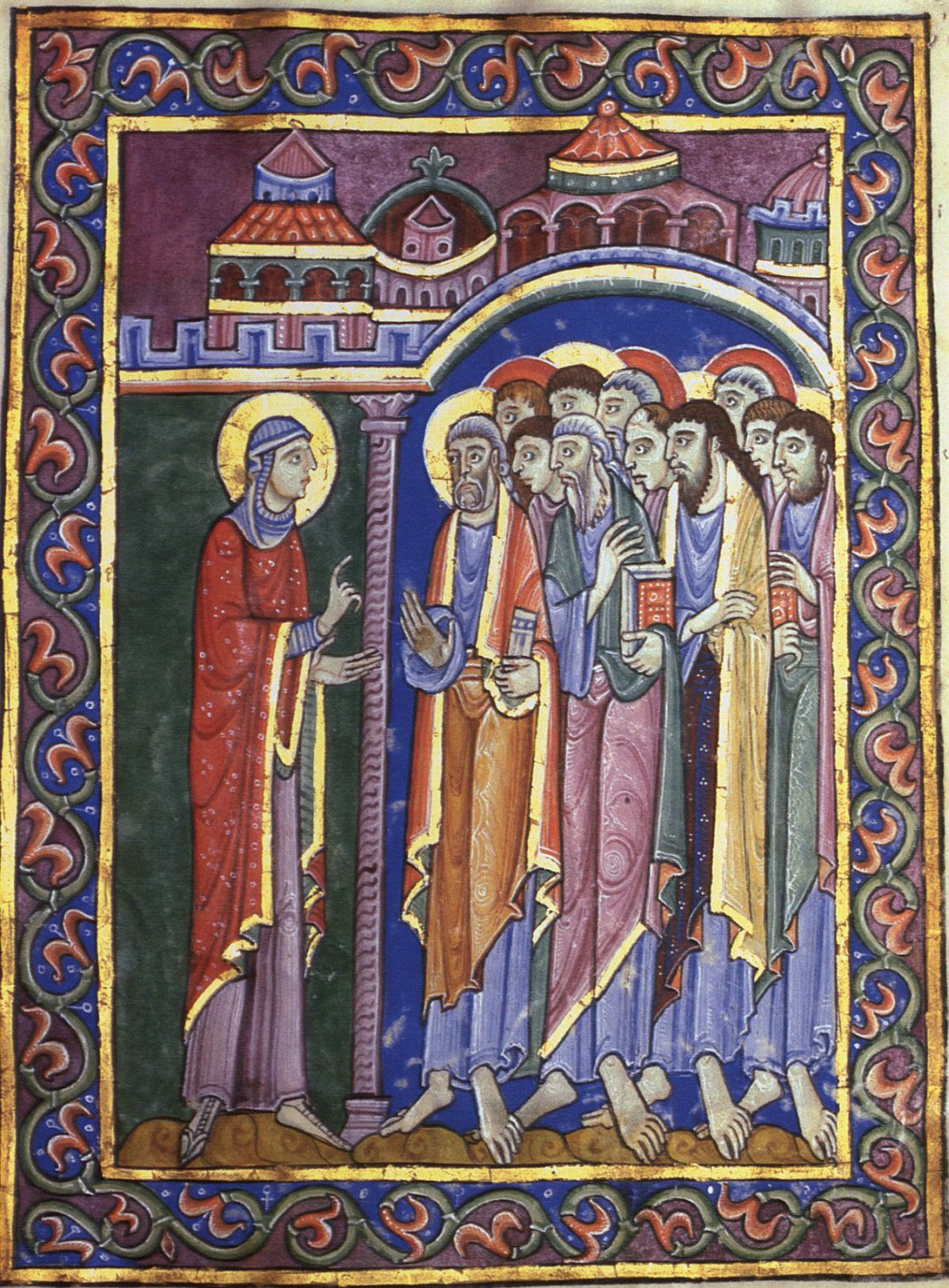 e) as depicted (announcing the Resurrection) in a panel of the mid-twelfth-century Passion of Christ window (ca. 1145-1155) in the basilique cathédrale Notre-Dame in Chartres:
http://tinyurl.com/26vjly2

f) as depicted in the later twelfth-century mosaics (ca. 1182) of the basilica cattedrale di Santa Maria Nuova in Monreale:
http://tinyurl.com/lf549r5

j) as depicted (with eight scenes from her legend) in a late thirteenth-century panel painting (ca. 1280-1285) in the Galleria dell'Accademia in Florence:
http://tinyurl.com/or6wgm2

m) as depicted by Giotto and assistants in the earlier fourteenth-century Mary Magdalen cycle (betw. 1300 and 1325) in the cappella della Maddalena of the Basilica Inferiore at Assisi (images expandable):
http://www.gliscritti.it/gallery3/index.php/assisigiottomaddalena

n) as depicted (at left; at right, St. Dorothy) by Ambrogio Lorenzetti on a wing of an earlier fourteenth-century triptych (ca. 1325) in the Pinacoteca Nazionale, Siena:

o) as depicted in the earlier fourteenth-century frescoes (betw. 1326 and 1350) in the church of St. Mary Magdalene in Kanfanar, a locality of Šorići (Istarska županija) in Croatia:
http://revitas.org/files/images/gallery/sorici-sv-marija-magdalena02.jpg

p) as depicted (with another Mary, observing Jesus' burial) in an earlier fourteenth-century fresco (betw. 1335 and 1350) in the sanctuary of the church of the Holy Ascension at the Visoki Dečani monastery near Peć in, depending on one's view of the matter, either the Republic of Kosovo or Serbia's province of Kosovo and Metohija:
http://tinyurl.com/ptmrzgo

q) as depicted (seeing Jesus before the angel-guarded tomb; Noli me tangere) in an earlier fourteenth-century vault fresco (betw. 1335 and 1350) over the altar of the church of the Holy Ascension at the Visoki Dečani monastery near Peć in, depending on one's view of the matter, either the Republic of Kosovo or Serbia's province of Kosovo and Metohija:
http://tinyurl.com/otm8sa
Detail views:
http://tinyurl.com/q2s7fb
http://tinyurl.com/r7hv7x

r) as depicted (washing Jesus' feet; scenes from her legend) on Lukas Moser's Magdalenenaltar (1432) in the St. Maria Magdalena Kirche at Tiefenbronn (Lkr. Enzkreis) in Baden-Württemberg: 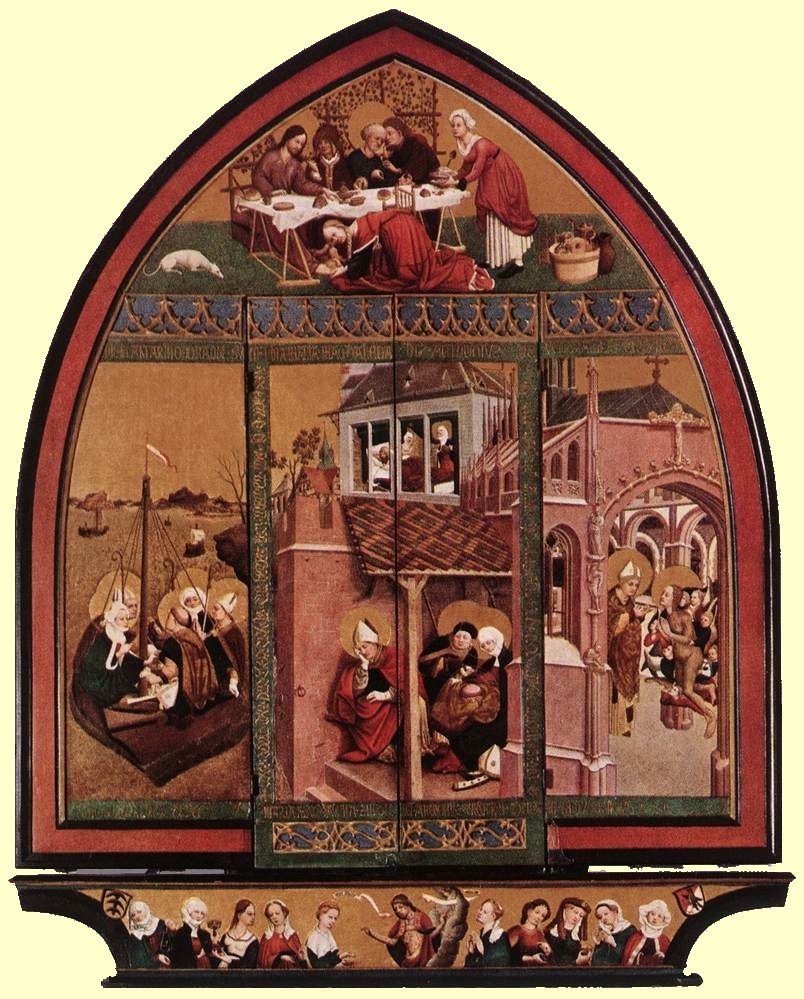 There isa description of the painting at  http://www.wga.hu/frames-e.html?/html/m/moser/magdalen.html

s) as depicted (scenes from her legend) in the mid-fifteenth-century frescoes of the chapelle Saint-Érige at Auron, Saint-Étienne-de-Tinée (Alpes-Maritimes):
http://www2.culture.gouv.fr/culture/medieval/en/a-zoomb1.htm

t) as portrayed by Donatello in a mid-fifteenth-century statue (ca. 1457) in the Museo dell'Opera del duomo, Florence:
http://tinyurl.com/pblrfl9

Detail view:
http://tinyurl.com/owj23tk
For this famous statue, and teh evolution of the image of Mary Magdalen as a penitent see Penitent Magdalene (Donatello)

u) as depicted (at right; at left, St. Godehard) by Giovanni and Luca de Campo in the later fifteenth-century frescoes (1463) of the oratorio di San Bernardo at Briona (NO) in Piedmont:
http://tinyurl.com/qdr3hhq

v) as portrayed (her ascension into Heaven) by Tilman Riemenschneider in a late fifteenth-century sculptural group (ca. 1490-1492) from his dismantled altarpiece for the high altar of the Pfarrkirche St. Maria Magdalena in Münnerstadt (Lkr. Bad Kissingen) in Bayern, now in the Bayerisches Nationalmuseum, Munich: 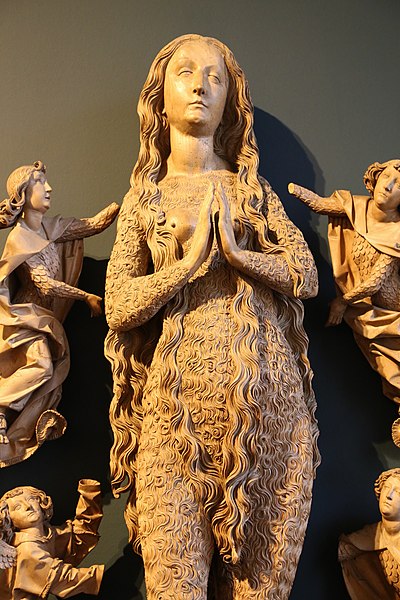 w) A nice, small selection of other late medieval images, in various media, of her ascension (click on the images to enlarge):
http://tinyurl.com/nsn4jww