Yesterday, July 13th, was the feast day of St Henry, who was Holy Emperor as Henry II from 1014-24, having been born in 973 and was Duke of Bavaria. There is an online account of his life and reign at Henry II, Holy Roman Emperor. He was the founder of the see of Bamberg, and there is an introduction to the history and architecture of the cathedral at the online article Bamberg Cathedral, and in German and in more detail and with more illustrations at Bamberger Dom

John Dillon posted on the Medieval Religion discussion group an impressive set of medieval images of the Saint-Emperor, pointing to the popularity of devotion to him over succeeding centuries in the Empire. They also provide an insight into the riches of medieval German ecclesiastical art.

I am not certain that all the unopened images will open satisfactorily - the computer I am using is being a bit awkward with some of them, although they do open on my mobile phone.

a) Henry as depicted in a full-length portrait in an early eleventh-century copy of the Gospels (ca. 1007-1012) donated to the cathedral of Bamberg by Eberhard I, the new see's first bishop (Bamberg, Staatsbibliothek, Msc.Bibl.95, fol. 7v):


b and c) Henry, supported by Sts. Ulrich and Emmeram, Henry being crowned King of the Germans as depicted in a full-page miniature in the early eleventh-century Sacramentary of Henry II (betw. 1002 and 1014; Munich, BSB, Clm 4456, fol. 11r): 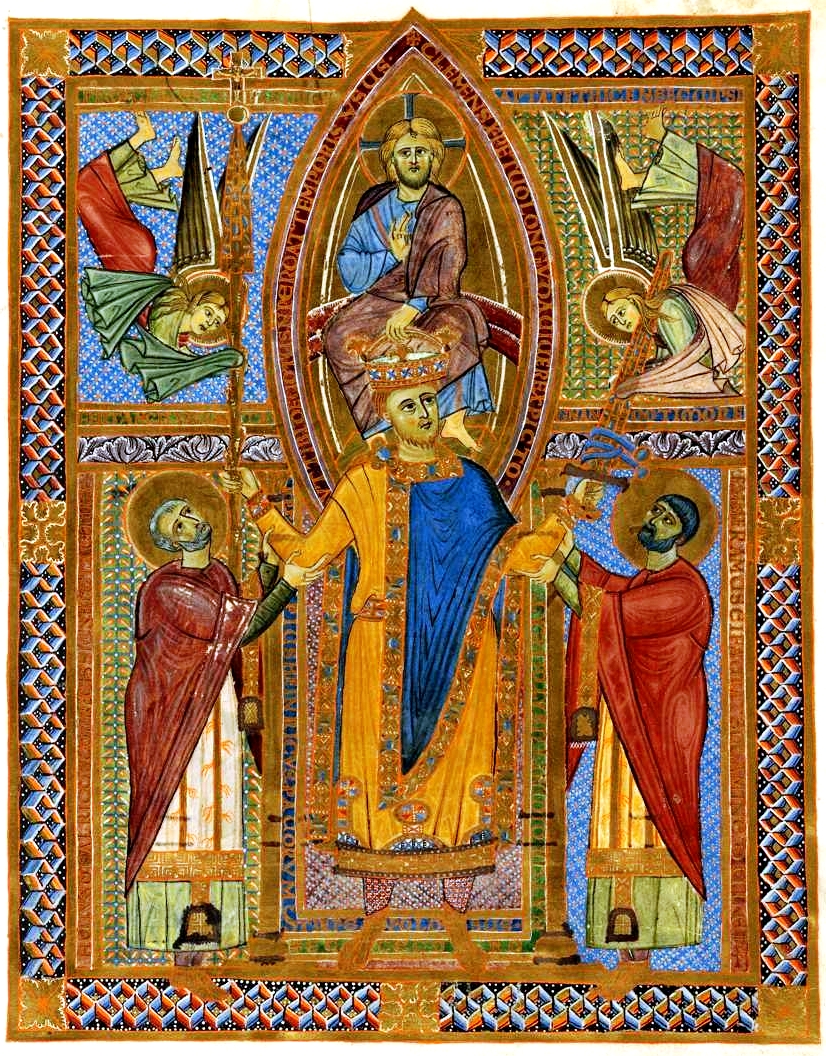 
f) Henry (at right; at left, Empress St. Kunigunde) as portrayed in statues from ca. 1290 on Basel's ex-cathedral, the Basler Münster, whose rebuilding Henry initiated and which later medieval tradition in Basel held had been consecrated in the couple's presence in 1019:
http://tinyurl.com/qxztblo
http://www.altbasel.ch/pic/doss_heinrich1.jpg
Detail view of Henry:
http://tinyurl.com/6sjsezg


g) Henry and Kunigunde as portrayed in high relief as founders on the fourteenth-century tomb (1340) of bishop St. Otto of Bamberg (d. 1139) in the crypt of Bamberg's St. Michelskirche: 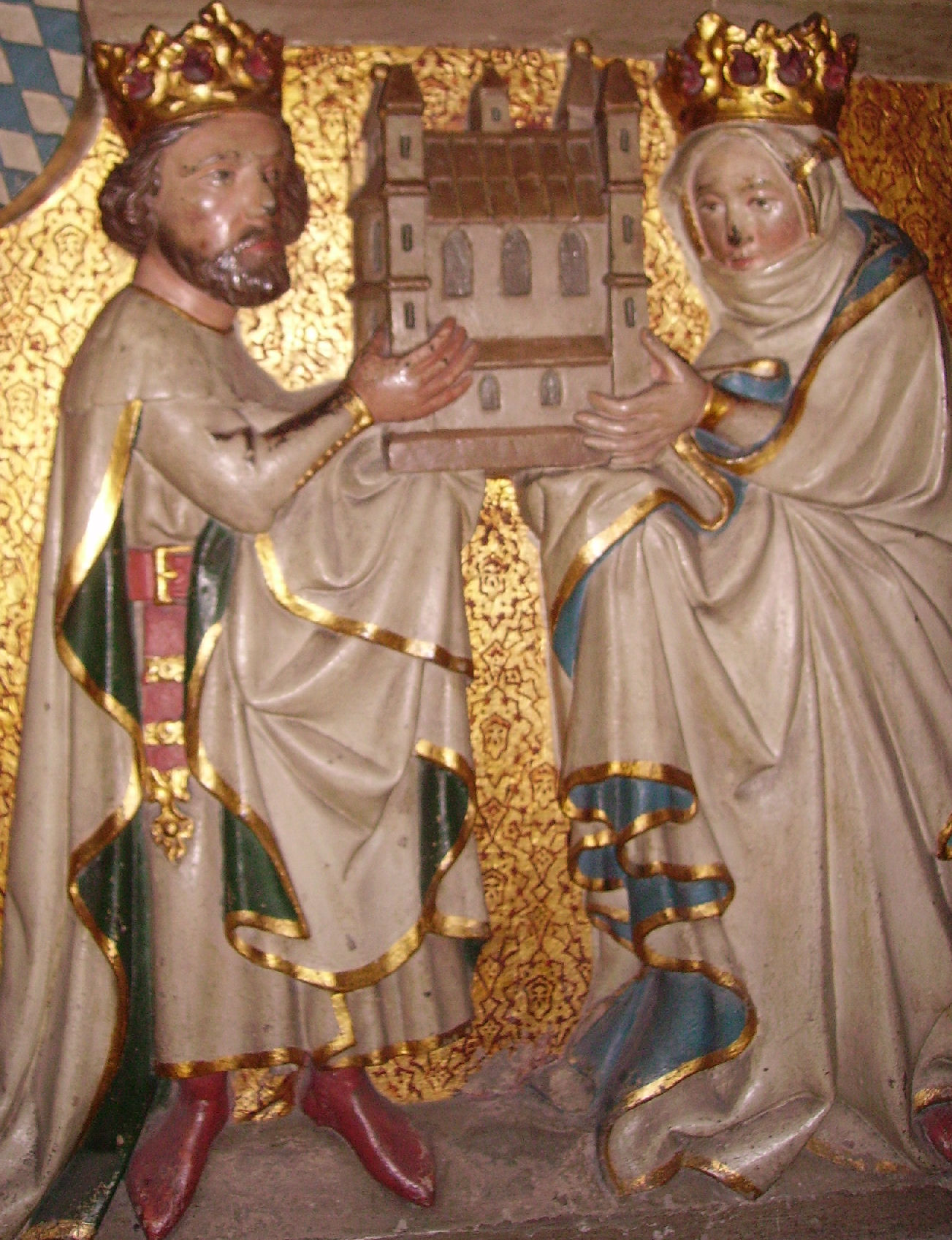 h) Henry as depicted in a panel of a mid-fourteenth-century window (ca. 1340-1350) formerly in the Stadtpfarrkirche zum Hl. Leonhard in Bad Sankt Leonhard im Lavanttal in Austria's Land Kärnten and now in the Cloisters Collection of the Metropolitan Museum of Art in New York:

i) Henry (at left) and Kunigunde (at right) as depicted in the upper register of an originally early fifteenth-century window (ca. 1414) from the Andreaskapelle in the cloister of Bamberg's cathedral, now in the diocesan museum: http://tinyurl.com/nbdgnjo


j) Henry and Kunigunde as portrayed in early fifteenth-century statues formerly on the west pediment of the Basler Münster and now on display in the Museum Kleines Klingental in Basel:
https://www.flickr.com/photos/40826712@N00/17189584610
Seen here overseeing preparations for a reception:
http://baseltattoo.ch/typo3temp/pics/47ca16aae7.jpg


k) Kunigunde and Henry between St. Lawrence and Jesus as depicted as founders in the earlier fifteenth-century Ehenheim Epitaph (after 1438) in the St. Lorenzkirche in Nürnberg (since 1015 part of the diocese of Bamberg):
https://asunews.asu.edu/files/images/Ehenheim%20Epitpah.jpg

l) Henry and Kunigunde as founders as depicted in a hand-coloured woodcut in an unidentified copy of the Bamberg breviary of 1484 (the arms at right are those of prince bishop Philipp von Henneberg):
http://tinyurl.com/nq6843r

m) Henry (at upper left) as portrayed in relief on the late fifteenth-century bronze armorial plaque (ca. 1489) of Merseburg's bishop Thilo of Trotha on the castle of Merseburg:
http://tinyurl.com/pws395r


n) Henry and Kunigunde as founders as depicted in a hand-coloured woodcut in the Staatsbibliothek Bamberg's copy of the Bamberg missal of 1507 (the arms at right are those of prince bishop Georg III. Schenk von Limburg):
http://tinyurl.com/plcm863

o) Henry and Kunigunde as founders as depicted in a hand-coloured woodcut in the Beloit College copy of Hartmann Schedel's Nuremberg Chronicle (1493) at fol. CLXXXVIr:
http://tinyurl.com/c3hpqf

p) Henry and Kunigunde as founders (each holding a different half of the cathedral) as portrayed in relief on a pair of late fifteenth- or early sixteenth-century wooden panels now in the diocesan museum in Bamberg:
http://images.eo-bamberg.de/5/430/1/11400220657930457.jpg

q) Henry and Kunigunde as portrayed flanking the BVM in modern replacements of their earlier sixteenth-century statues (ca. 1511) above the clock on the facade of Basel's city hall:
http://tinyurl.com/mubwlq8
The originals inside the city hall (the BVM was refashioned in 1609 as Justitia):
http://www.feierabend.de/images/channel/web/16/8/g.1498498.jpg


r) Henry and Kunigunde as portrayed in relief by Tilman Riemenschneider and workshop on the imperial couple's present tomb in the cathedral of Bamberg (contracted for in 1499, completed in 1513):
http://tinyurl.com/q8jf7rr
On the side of the tomb chest the relief shows Henry (at left) and Kunigunde (at far right) and depicts an incident from Kunigunde's Vita in which she is said to have defended herself successfully, by walking barefoot over red-hot ploughshares, against an accusation of adultery.


s) Henry (at right) and St. Castulus flanking the BVM and Christ Child as portrayed in statues on the earlier sixteenth-century altarpiece (1514) of the Münster St. Kastulus in Moosburg an der Isar:
http://tinyurl.com/7zubrgl

u) Henry and Kunigunde as depicted (bottom register at right) on the cross of a chasuble from 1519 in the cathedral museum in Salzburg:

v) Henry (at right) as depicted in an earlier sixteenth-century window (1520) in the Saal des Regierungsrates in Basel's city hall:
http://tinyurl.com/ojrhesx


w) Henry (at centre) as portrayed in an earlier sixteenth-century statue (ca. 1520-1525) on Bamberg cathedral's so-called Riemenschneider Altar (the statue of St. Sebastian has been attributed to Tilman Riemenschneider), with a perhaps slightly earlier founders' portrait of Henry and Kunigunde on the predella of this confection put together in 1926 from several previously unrelated pieces: