Today is the novus ordo feast of St Benedict, the founder of western claustral monasticism. To mark the day Gordon Plumb post these images on the Medieval Religion discussion group:Some scenes in glass, mostly from the St Denis window devoted to St Benedict of c.1145.

Twycross, St James. east window, 4a - Benedict having vision of Maurus saving brother Placid from drowning - from St Denis:
https://www.flickr.com/photos/22274117@N08/2366178841
The scene is of St Benedict having a vision of Maurus saving Placid from drowning. The devil above comes from another scene, of St Benedict in a cave being fed by Romanus - one other part of that scene is in panel 3a of this window, but the figure of St Benedict in the cave is in the chapel of Raby Castle in County Durham.

Oxford, Trinity College Old Library, 2nd east window, 2b:
http://www.flickr.com/photos/22274117@N08/17904632782
Trinity College was, of course, as Durham College, a Benedictine House of studies until the dissolution of the monasteries.

John Dillon added to these a set of links to further medieval images of Benedict, posted in March this year, at: http://tinyurl.com/or6kv5g

a) as depicted (at right, flanking Christ in a mandorla; at left, St. Gregory the Great) in a pen and ink drawing in a very late tenth- or very early eleventh-century copy of Gregory's Homilia in Ezechiel formerly in the abbey of Fleury (Orléans, Médiathèque, ms. 175, p. 149):

b) as depicted (curing the boy afflicted with leprosy) in a mid- to later eleventh-century fresco in Rome's chiesa di San Crisogono a Trastevere:

c) as depicted (at left; at right the BVM and Christ Child) in a mid- to later eleventh-century fresco in the lower church of Rome's basilica di San Clemente: d) as portrayed on two later eleventh- or early twelfth-century capitals in the transept of the abbey church of Fleury at Saint-Benoît-sur-Loire (Loiret):
1) at left, in the miracle of the peasant's dead son: http://jalladeauj.fr/oiseauxromans/styled/files/merle-st-benoit.jpg
3) at right, disrobing and entering thorny vegetation in order to avoid that temptation:

e) as portrayed (at right, in the incident of Benedict's temptation of the flesh) on an earlier twelfth-century nave capital (ca. 1125) in the basilique Sainte-Marie-Madeleine at Vézelay:
http://tinyurl.com/pg63mru

f) as depicted in a thirteenth-century fresco in the rupestrian chiesa di Santa Lucia alle Malve in Matera (MT) in Basilicata:
http://www.santaluciamatera.it/f12.jpg

g) as depicted (with Sts. Maurus and Placidus) in two thirteenth-century frescoes in the lower church of the monastero di San Benedetto at Subiaco:
1) Benedict receives poisoned bread: 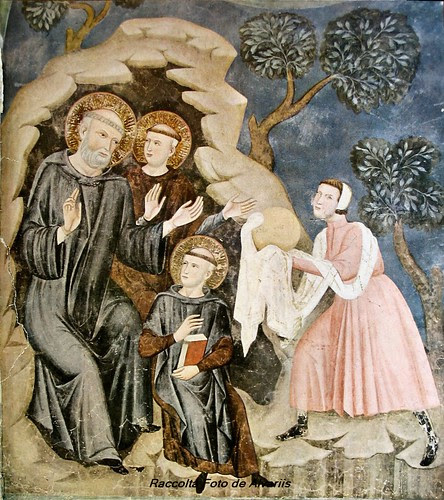 2) Benedict instructs a crow to take the bread away:

h) as portrayed in relief (scenes from his life; at center, the Baptism of Christ) on a mid-thirteenth-century altarpiece from the abbey of St. Denis (ca. 1250-1260), now in the Musée National du Moyen Age (Musée Cluny) in Paris:
http://tinyurl.com/ozxww4j
Detail view:
http://tinyurl.com/q8l9evk

i) as depicted (second from right, presenting one of the founders) by Thomas von Villach in a late fifteenth-century fresco (1493) in the abbey church at Sankt Paul im Lavanttal (Kärnten):
http://tinyurl.com/ojpjhvq

I am not sure if these last two sets of links can be guaranteed to work.