Five centuries ago France, in January 1515, witnessed the death of one king, and the accession of another.


The process began with the death on January 1st of King Louis XII. He had been ill since before Christmas, allegedly worn out by his recent marriage to Mary, sister of King Henry VIII. 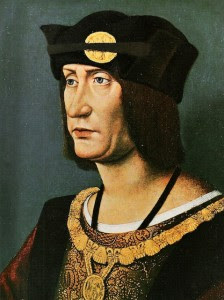 The King who was 52, the same age as King Henry VII had been, and formerly Duke of Orleans, had ruled France since 1498 when he succeeded his cousin King Charles VIII. From his predecessor he took over his wife Queen Anne so as to secure her inheritance of Brittany, and also the French campaign in Italy. From being a Prince of the Blood willing to challenge the monarch as he had done in the 1480s he now became King and pursued a pragmatic course, actively engaged in plans to conquer the Duchy of Milan and to partition Naples and Sicily with Spain, anxious to preserve the unity of his French realm  regarding Brittany, able to conciliate the nobility and yet retain secure finances. There is an online account of his life and reign here. 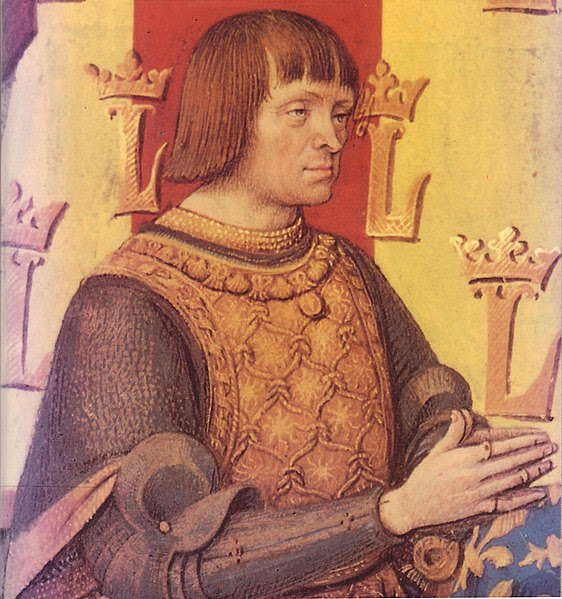 To retain Brittany and, hopefully, secure the succession, he married the widow of his predecessor, Queen Anne, of whom there is an illustrated online life here.

To do so required an annulment of his existing marriage to Jeanne of France, daughter of King Louis XI, who appears to have cynically married his disabled daughter to Louis as a means of ensuring that the Orleans line would die without heirs.  The Pope was willing to grant the appropriate dispensation and Queen Anne, uniquely, had her second turn at being Queen of France. Jeanne retired to a convent and was eventaually beatified in the twentieth century. The episode cannot have escaped the notice of King Henry VIII and his advisors a generation later.

As events turned out the new King and Queen hadsons who died at birth, and were left with two daughters,  the elder of whom, Claude, was married to the next male heir, Francis Duke of Angouleme, so as to maintain the Breton inheritance.

King Louis XII was buried alongside his late wife Queen Anne in the royal abbey of St Denis.

The baldachin was in arcades, and in the base of the sarcophagus was depicted the victories of Louis XII (Battle of Agnadello, the triumphal entry into Milan), and statues of the Twelve Apostles and the four cardinal virtues are the work of the Juste brothers, Italian sculptors who received the order in 1515. The transi(whose realism was so shocking that included an opening abdomen stitched after the extraction of the entrails before embalming) and orans Prie-dieu crowning the platform are attributed to Guillaume Regnault. The tomb was desecrated during the Revolution on 18 October 1793 and the bodies being thrown into a mass grave. Alexandre Lenoir saved much of the monument, which was preserved in the Museum of French Monuments in 1795, before being returned to the Royal Basilica under the second Bourbon Restoration.

The most important and original work of the Juste brothers is the tomb of Louis XII at St Denis, commissioned by his successor Francis I, probably in 1515, and finished in 1531. It bears the name of Jean (Giovanni) only, but is often said to be a work of both brothers working in collaboration. The arrangement with the kneeling figures above links the design with the tomb of Charles VIII, and the placing of the gisants in an arcaded enclosure below follows the usual disposition of the fifteenth century. In all other respects, however, the tomb marks an innovation in French practice. First of all, the enclosure of the gisants is now almost a small chapel open at the sides and the ends. This feature is combined with the allegorical figures of the Virtues at the corners and the apostles in front of the arcade.

In the sculpture several different hands can be distinguished. Two groups - the apostles and the Virtues - seem to be Florentine in derivation and apparently connected with the style of Andrea Sansovino. The apostles and the Virtues can almost certainly be attributed to members of the Juste family. The bas-reliefs round the base seem also Florentine in style and indicate an artist trained in the studio of Bertoldo. On the other hand, as suggested by Vitry and Pradel, the kneeling figures of the King and Queen on the top of the tomb are likely to be by a French artist of the circle of Colombe. The most remarkable group consists of the two gisants. It seems likely that these figures are by a French artist with some knowledge of Italian sculpture. The statues are among the most remarkable works of the period. The sensitiveness of their modelling and the liveliness of their conception are shown up by the contrast with the heavy proportions and coarse modelling of the statues round the base of the tomb.

To English popular perception King Louis XII is presented as the elderly husband of Mary Tudor, who then married for love Charles Brandonm, and who, once reconciled to her brother King Henry VIII, became Duke and Duchess of Suffolk. By contrast King Francis I is one of the most easily recognised Kings of France, and recalled as a (usually)friendly rival and contemporary of King Henry VIII - the French king died only two months after him in 1547.

There is an online biography of King Francis I here

The new king was 20 and there soon developed that rivalry over appearance and matters of style and presentation with King Henry VIII, who was three years older. 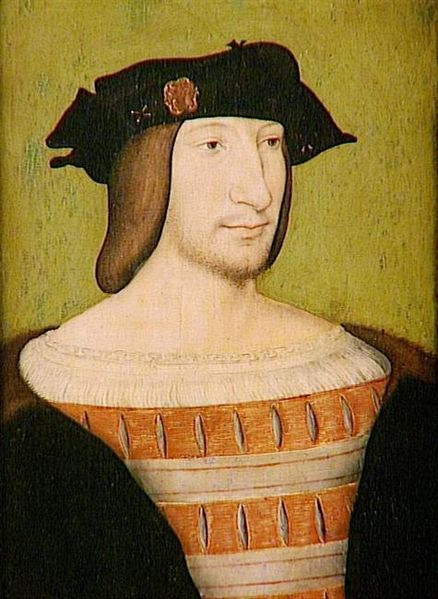 King Francis I was crowned at Rheims on January 25th 1515. There is a useful online account of the history of the ceremony and its form at Coronation of the French monarch and there are some details of the regalia used in the liturgy at Crown of Charlemagne.

In the ritual of the Sacre the new King was anointed with oil from the Sainte Ampoulle - about which there is an online article here - and was vested and crowned as King of France. 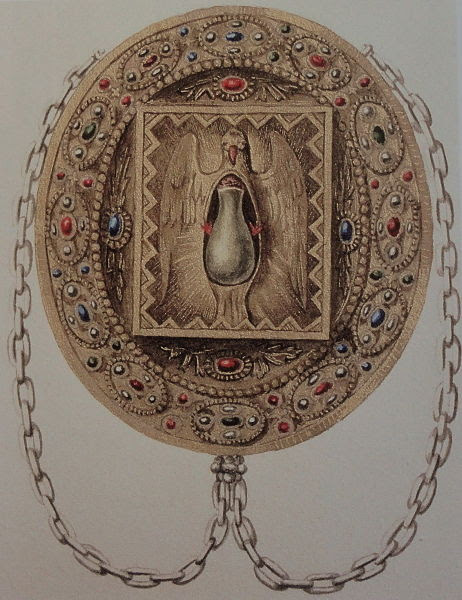 The Sainte Ampoulle before it was smashed in 1793 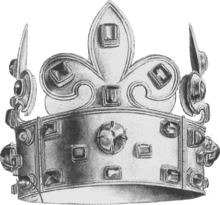 The Crown of Charlemagne - the Coronation Crown of France