The Suppression of Evesham abbey

Today is the 475th anniversary of the dissolution of the great Benedictine abbey of Evesham, the last monastic house to be suppressed under King Henry VIII.

There is an online history of the abbey which can be viewed at Evesham Abbey.

Two posts on the blog A Clerk of Oxford  give a good idea of the charm of the town, the remains of the abbey, the two historic churches and the museum, and many illustrations, notably of the fine nineteenth and twentieth century stained glass in the churches. They can be seen at A Trip to Evesham: Pigs, Fish, Angels, and the Dissolution of the Monasteries and at Medieval People in Modern Stained Glass: Evesham Edition

In the Almonry museum at Evesham - one of the few buildings to survive from the complex - there is a model showing what the abbey may have looked like in 1540. 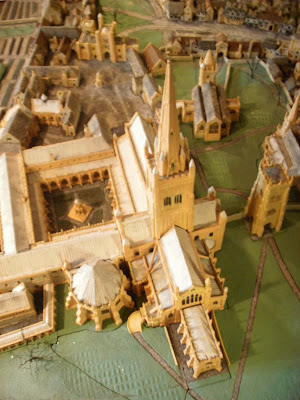 Evesham Abbey as it may have appeared in 1540
The bell tower is centre right, adjacent to the two surviving parish churches

The abbey from the south-west

The bell tower of Evesham Abbey.
Completed on the eve of the dissolution it is, apart from the doorway of the chapter house and some very low walling, all that survives above ground of the central buildings of the complex.

“The sufferings of history, for example, are dulled by repetition and time, but personal accounts bring such events to life. The Dissolution of the Monasteries has become to many yet another ‘statistic’ to be absorbed in a study of a larger-than-life Henry VIII, yet it was an agonising period for the men who devoted their lives to the Church.

“In the first of the STC (short title catalogue) sales in 1973, for example, one item was a 1537 first edition of Matthew’s version of the Bible which belonged to John Alcetur (Alcester), a monk at the great Benedictine Abbey of Evesham. The Abbey, partly owing to its size and partly to the resistance of Abbot Lichfield, was one of the last to be suppressed. Only about twenty Benedictine abbeys and priories survived into the year 1540, and by the end of that year not one remained. Alcester had made extensive annotations in Latin and English, and had covered three blank pages with a musical score, probably of his own composition.

“However, it is his personal record, at the end of the Book of Maccabees, of Henry’s tough measures that makes poignant reading today. He wrote:

“It is thought that within two months of the suppression of the Abbey, Alcester’s Bible was taken from him.” — Roy Hartley Lewis, Antiquarian books: an insider’s account, pp.138-9.

Dom Richard Lyttleton was sub-sexton at the time of the dissolution, and was, presumably, a member of the family which has played a major part in the history of the county. He lived on through all the successive changes of religious practice of the sixteenth century. Eventually in 1603, Father Augustine Bradshaw reconciled to the Benedictine order 'one Lyttleton, who had formerly been a monk of Evesham, and was now best known by the nickname of 'parson-tinker.' Being reclaimed he went home and 'presently fell blind and so remained almost two years deprived of his benefice and had he not been bedridden had been imprisoned for his conscience and so died with great repentance being near 100 years old.'


Another monk who was doubtless present at that last saying of the Office in the abbey church was Dom John Feckenham (c.1510-1584). Born John Howman he took the name of his home town on entering the abbey. After the dispersal of the community he became rector of Solihull, was imprisoned under King Edward VI, released under Queen Mary I, becoming Dean of St Pauls and in 1556 returned to the Benedictine life as Abbot of the refounded Westminster Abbey. As such he participated in the Coronation of Queen Elizabeth I in 1559. Following the second dissolution of the abbey later that year his life alternated between imprisonment and parole until his death at Wisbech in 1584.


The life of him by C.S.Knighton in the Oxford Dictionary of National Biography can be read here.

Feckenham's Westminster refoundation's last survivor, Dom Siegebert Buckley, transferred in the early years of the seventeenth century, his rights as representative of the whole community to two English benedictine who sought to establish in exile a specifically English house. Armed with his grant they did so, at Dieulard. that community, forced into exile by the French revolution returned to England and established Ampleforth, which in consequence useds the arms of the medieval abbey of Westminster.

Thus a link, tenuous but real, binds the great abbey of Evesham, and all it represented, to the modern Benedictines in Yorkshire and beyond.