370 years ago, on January 10th 1645, Archbishop William Laud of Canterbury was beheaded on Tower Hill by the Parliamentarian regime. 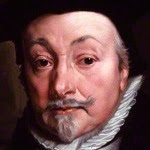 There is an online account of his life and trial here, and the excellent account of him and his career by Anthony Milton from the Oxford Dictionary of National Biography can be read at William Laud

As these live show the Reading born Archbishop was intimately associated with Oxford, where he proved to be one of the greatest Chancellors of the University. In 1663 he was buried at St John's, his old college, which he had enriched, notably by the building of Canterbury Quad, and the college still possesses vestments he gave and the scull cap he is said to have worn to the scaffold.

Elsewhere in Oxford the porch and statue of the Virgin and Child at St Mary's and the crucifixion scene in the east window of Lincoln College Chapel (built by his great rival John Williams, Bishop of Lincoln and later Archbishop of York) were both cited as evidence to support the charges brought against him in 1644 at his show-trial. This and his ultimate fate displayed the vicious hatred of his opponents.

High Church rather than the Romaniser he was alleged or believed to be Laud made visible a vision and reality of a Church of England that sought to stand in the tradition of historic Christianity.By his life work ,a nd more importantly perhaps, his martyrdom, he gave an enduring strength to that possibility. It informed the Restoration Church and the High Church party of the period up to the Oxford Movement. that revered Laud, and doubtless could not have come about as it did, if at all, without his example.

He remains a controversial figure - the late Professor Patrick Collinson in 1980 condemned Laud as "the greatest calamity ever visited upon the English Church." Others, myself included, would disagree and see Laud as one of its greatest blessings.