Today,January 18th was a significant date in teh calendar of the Kingdom of Prussia - it was on this day in 1701 that King Frederick I was crowned and on which in 1871 German Empire, presided over by the King of Prussia as German Emperor was proclaimed at Versailles.

As I am justa bout to sart reading Christopher Clark's acclaimed Iron Kingdom: The Rise and Downfall of Prussia 1600-1947 today seems a good day on which to post some pictures of Prussian palaces and royal residences.

The coronation of 1701 took place in the church of the castle in Königsberg. The buildings were destroyed in the latter stages of the Second World War and afterwards, being finally blown up in 1986. Subsequently there has been talk of rebuilding it. The case for that is set out in a very interesting illustrated post, which includes aplan of the buildings, from a blogger in the city here.  There is an illustrated history of the buildings at the online piece Königsberg Castle 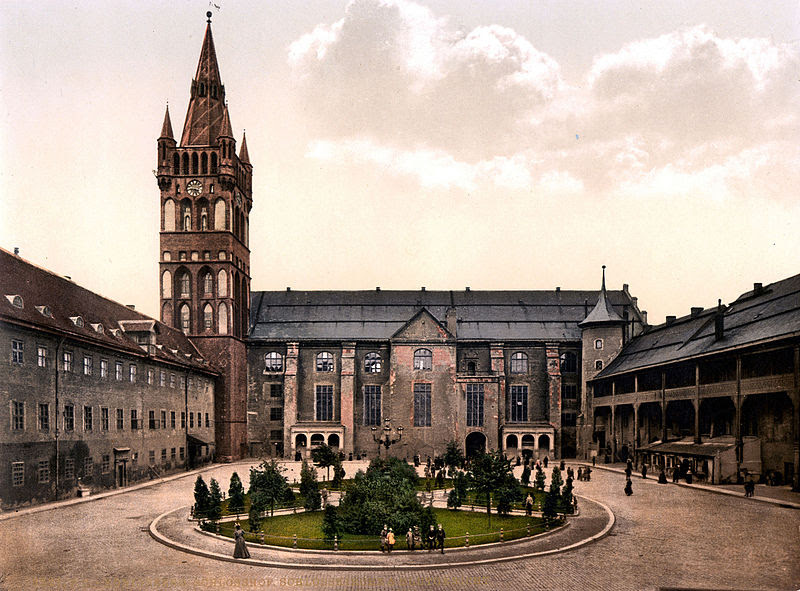 The courtyard and church of Königsberg castle in the 1890s

The castle before the Second World War

As Kings the Hohenzollerns were in the eighteenth century prodigious builders in the Baroque and Rococco styles, despite the rather dour image we often have of Prussian court and social life.

The first of these palaces which survives intact is Charlottenburg, in the western part of Berlin. There is an illustrated account of the history and architecture of the building at Charlottenburg Palace.

Further to the west of the city a whole series of royal residences were created at Potsdam. Of these the oldest, of which there is an illustrated history at Potsdam City Palace, has recently been rebuilt following its final deliberate destruction by the East German authorities after wartime bombing. There is an illustrated post by Andrew Cusack about the plans from 2010 at Potsdam's City Palace to be Resurrected. Whether such a partial reconstruction of the interior is right is, of course, open to debate.I would prefer to see a full reconstruction.

There is more about the rebuilding at Reconstruction projects in Potsdam (City Palace, baroque Quartier) and the history of the building, its destruction and the begining of reconstruction work is covered in awell illustrated article at Rise and Fall of the City Palace


Inspired by King Louis XIV's palace at Marly King Frederick II created his own palace for relaxation, at Sanssouci in the park at Potsdam. This was an idyllic place situated above terraced vineyards where he couls escape the cares of state and military operations. The palace was built in 1747-7, towards the end of the War of the Austrian Succession. There is an account of it at Sanssouci. A fine set of photographs of the Palace can be seen here.


There are a fine series of photographs of the palace here.

Following his next major European conflict, the Seven Years War , the King built the Neue Palais in Potsdam in the years after 1763. On top of the dome naked figures of his three female opponants - the Empress Maria Theresa, the Empress Elizabeth of Russia and Madame de Pompadour - are to be seen, holding up the King's crown.

There is an account of the building at the illustrated article New Palace Potsdam, which shows how it was built to entertain other royal guests and only used as a regular residence in the late nineteenth century. It survived the Second Wotld War relatively unscathed.


If the eighteenth century was the great age of Prussian palace building - and its achievements were spectacular - in the late nineteenth century the tradition continued with structures such as the Empress Frederick's Schloss Friedrichshof, built in the Taunus in her widowhood, and now a hotel, and her son Emperor Wilhelm II's Romanesque palace at Posen/Poznan, about which there is an illustrated article at Imperial Castle, Poznań. This was built in 1905-10.

The Imperial Castle as originally built.
Following damage in the Second World War the tower was reduced in height