The Rite of Baptism

Following on from yesterday's Feast of the Baptism of Our Lord I am reproducing the text of a post on the Medieval religion discusion group about the change in practice from total immersion to pouring or sprinkling - technically described as affusion - the baptismal candidate. It came from the Rev. Gordon Plumb in answer to a query about this from another list member.

Towards the end of the Middle Ages images show that baptism of infants was by total immersion as here: 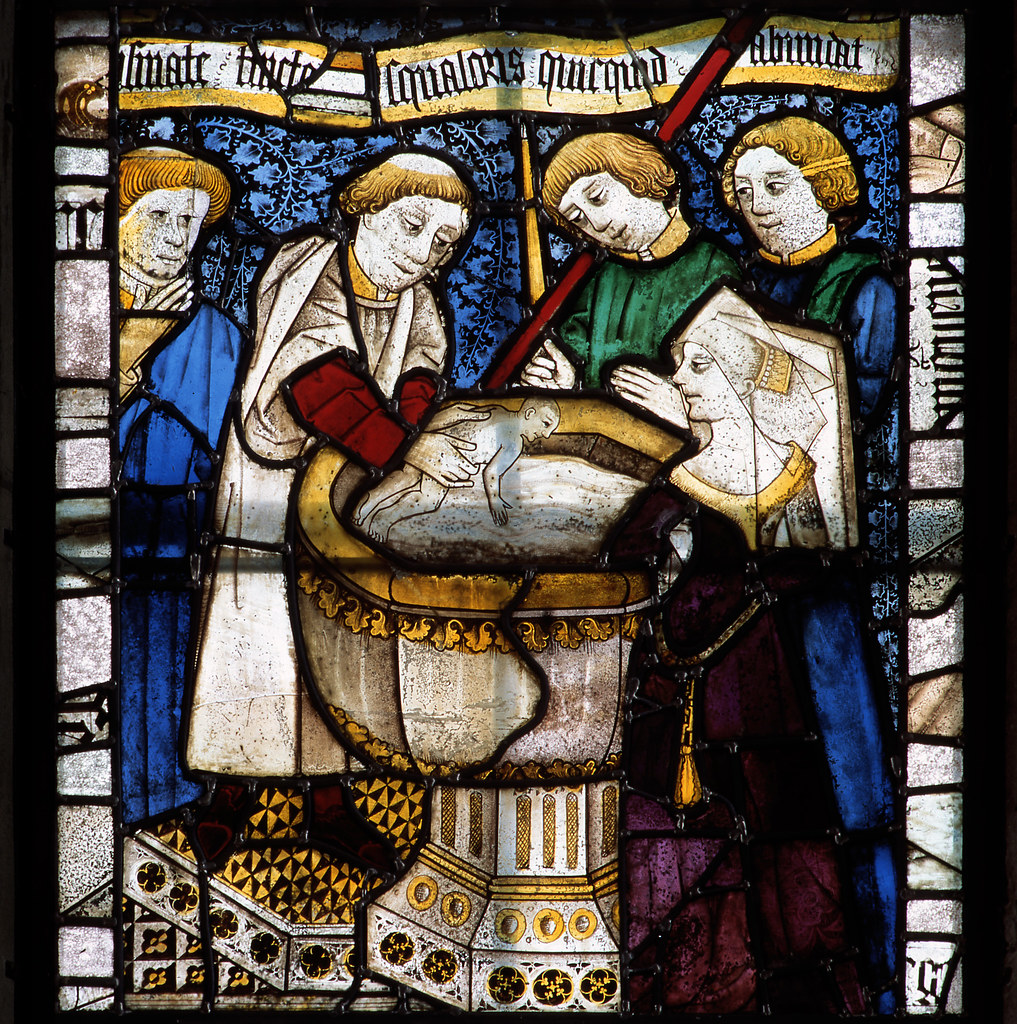 Scene of Baptism from a Seven Sacraments window painted by Richard Twygge and Thomas Wodshawe in 1482 for the collegiate church at Tattershall in Lincolnshire.

Coming down to the font from the top right is the stream of Christ's blood, flowing originally from a central figure of Christ himself - symbolizing that all the sacraments derive their virtue from the sacrifice of Christ on the cross. Note how the priest is shown as having rolled up his surplice sleeves to avoid them getting wet during the immersion of the child!
The father is probably the figure behind the priest, and the other three figures are the sponsors or godparents. (Since the mother was unclean for 40 days after childbirth and baptism usually took place within days of birth, she was not usually present).
Image and comments: Gordon Plumb om Flickr
Maxwell E. John in his The Rites of Christian Initiation: their  Evolution and Interpretation, Collegeville, Minnesota, 1999 writes at page 217,

"While liturgical documents still indicated a preference for immersion or submersion, and baptismal fonts generally remained large enough to accommodate easily the immersion or submersion of infants, there does develop, in France primarily, a marked preference for pouring or sprinkling the water on the candidate during the baptismal formula. Although, as we have seen, this practice of "affusion" is also a very ancient practice in the history of baptism (see the 'Didache'), by the end of the Middle Ages it had tended to replace immersion and submersion as the common and regular practice".

It appears that affusion must have become the norm in the West sometime between the 900s and 1400s since it was never adopted as normative in the East - which still practices triple immersion of the infant, as I have witnessed in Oxford - but it is normal in most forms of Protestantism, although adult total immersion is, of course, practised by some reformed groups.

I would add that the church at Tattershall is very well worth visiting. Less well known than the spectacular brick great tower of the castle, both are the creation of Ralph Lord Cromwell, Lord Treasurer under King Henry VI.