The Crusade of Varna

A conversation with one of my students a few weeks ago reminded me that the 570th anniversary of the Crusade of Varna, which culminated in the disastrous defeat of the Polish-Hungarian army at the battle of Varna on November 10th 1444. Amongst the numerous fatalities were the twenty year old King Wladyslaw III of Poland and Hungary amd the Papal Legate, Cardinal Giuliano Cesarini.

The Crusade was an ambitious plan to rescue the remains of the Byzantine Empire from the ever advancing Turks with a Papal fleet to transfer the troops from Varna to relieve Constantinople. Like the other great Crusading venture of the period, that of Nicopolis in 1396 - for which see the accounts at Crusade of Nicopolis and Battle of Nicopolis - it ended in a catastrophe for the Christian army, and in consequence paved the way for the loss of Constantinople in 1453 and eventually the Hungarian disaster at Mohacs in 1526.

In a piece about the recent book by Colin Imber The Crusade of Varna 1443-45 (Crusade Texts in Translation 14, Ashgate) it is said that "[m]ore than any other single event, it was Murad's victory at Varna that secured Ottoman domination of the Balkan Peninsula, with consequences which are still apparent today."

There is an online account of the Crusade at Crusade of Varna and of the battle itself at Battle of Varna.

To help readers unfamiliar with the period and region to understand the tangled diplomacy and politics of the period in central Europe and the Balkans it may be useful to look at the online life of the young Polish King who led the Crusade, King Wladyslaw III, who had become King of Hungary in 1440, which can be seen at Władysław III of Poland, and it may also be helpful to look at the life of his life of his father King Wladyslaw II (Grand Duke Jagiello of Lithuania), who had united Poland and Lithuania by his first marriage to Jadwiga of Poland in 1387, which can be seen at Władysław II Jagiełło. There is an illustrated online chronology of King Wladyslaw III in Polish here. 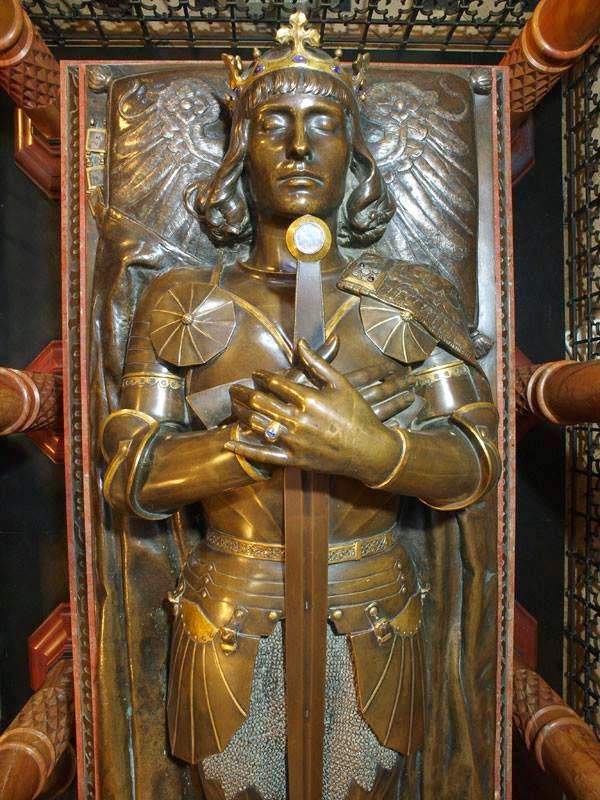 The cenotaph to King Wladyslaw III erected in 1906 in the Wawel cathedral in Cracow
Image:modernmedievalist.blogspot.co.uk
Before I prepared this post I was unfamiliar with the story of the King's survival at Varna and of his subsequent life and marriage in Portugal, recounted in the online biography above. Such myths of the suvival of a ruler who disappears, such as those of King Harold II in England, of King Sebastian of Portugal or of King Louis XVII in Frances, or of members of the Romanov dynasty in the twentieth century, are a by no means unknown phenomemon, and point to the human desire to hope against the odds, and to create myths around young and romantic royal figures.

Manuel Rosa's book on the origins of Christopher Columbus is high on my TBR pile. I'm not sure whether the book has been translated into English, though. I can read it in my native Polish. I hope you don't mind, but I recommended your post via Google.

Warfare is a fascinating subject. Despite the dubious morality of using violence to achieve personal or political aims. It remains that conflict has been used to do just that throughout recorded history.

Your article is very well done, a good read.