Fall of the Berlin Wall

Twenty five years ago tonight the Berlin Wall fell. It was, I think, one of the most memorable and moving nights of my life.
There had been reports of people leaving East Germany to reach countries from where they could travel freely to West Germany and claim citizenship. There were also garbled reports of attempts to prevent this at train stations. Something was happening, but quite what was unclear. Nothing prepared one for putting on the 9pm BBC television news and the report beginning with the fact that the East German government had resigned and opened the Berlin Wall. Crowds were streaming to the Brandenburg Gate. 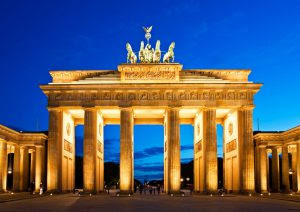 The Brandenburg Gate
Built in 1788-91 and now restored and once more open
Image:blog.foreigners.cz


This was something that one might have hoped would happen, but never was sure would happen.After so long - I recall the creation of the Berlin Wall in 1961, if not the division of Germany and Europe at Potsdam - here was real and profound change, and change, real and positive cahnge for the better. Here was hope indeed.
The next day I was, mid-morning, in my usual tea and coffee shop in Pontefract.Therte I found agroup of friends, men of Conservative sympathies, stiing around atable looking glum. Was n't the news bad they said - this would lead to German reunification and "in ten years they'll be invading everywhere." I replied that as Conservatives they should be rejoicing that people had been set free from forty plus years of Communism - surely that was what Conservatives, and the Iron Lady herself wanted. They should be rejoicing I said.
The events of that night still strike an emotional chord with me - recalling it my eyes prick with the urge to cry for sheer joy at true liberation for the people of Germany after all they had gone through since 1933.
Posted by Once I Was A Clever Boy at 09:40