Today is the 475th anniversary of the martyrdoms by hanging, drawing and quartering of the last abbots of Glastonbury and Reading and their companions, two monks at Glastonbury, John Thorne, the Treasurer and Roger James, the Sacrist, and at Reading another monk John Rugge and John Eynon, priest of St Giles church in the town. There is amodern plaque to his memory in that church.

The other year I posted biographies of the two abbots in my posts Bl.Richard Whiting, Abbot of Glastonbury and Bl.Hugh Cook or Faringdon, last Abbot of Reading

Reading Abbey from the River Kennet

A reconstruction drawing by R.W.Ford The model was made by Mr R W Ford which is on display in the Museum of Reading and shows the Abbey as it was around 1500.

Move your cursor over the picture of the Abbey above. Click when it turns into a hand to show that there is a link to another page. You will then jump to a page telling you about the part of the Abbey you have clicked on.
You may like to use the page on the buildings of the Abbey clearly numbering and naming the different parts - click here. 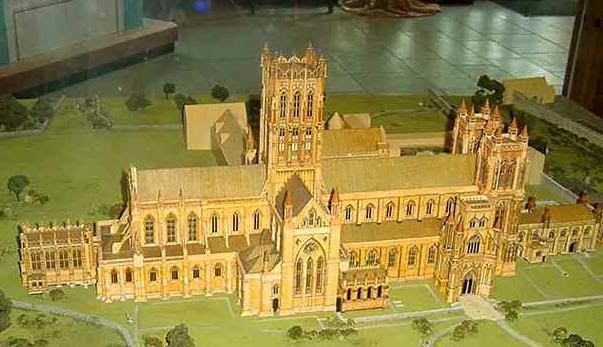 
There is more about the fate of Bl. Richard Whiting and the possible survival of some of his bones, now at Prinknash Abbey, at the postvfrom the blog Clas Merdin at The Bones of Richard Whiting

In the modern Catholic church of the Shrine of Our Lady of Glastonbury is atapestery hanging on either side of the Statue of Our Lady, and which depicts various saints and Blesseds associasted with Glastonbury.
On the left are Blesseds Richard Whiting, John Thorne, and Roger James. Below them is St Dunstan (depicted with the Devil caught by his nose with pincers) and Blessed Richard Bere - he was a nephew of Abbot Whiting's predecessor and was one of the London Carthusians who died in prison.
On the right ate St Joseph of Arimathea, St David, St Patrick and St Brigid (depicted with a cow and a milking stool)

According to the Wilipedia entry on him his rectoral cross was rescued by the Mannock Family of Stoke-by-Nayland in Suffolk, who eventually gave it to Buckfast Abbey in Devon.