Today is the seventh centenary of the death of King Philip IV of France in 1314.

The King died at Fontainebleau, where he had been born in 1268, following a stroke which he suffered whilst he was hunting. 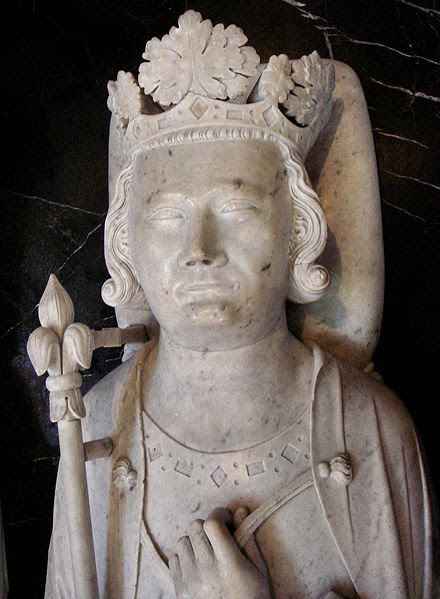 There is an online account of his life and reign at Philip IV of France. He was succeeded by his eldest son King Louis X, who was already King of Navarre through his mother, King Philip's late wife, Joan. There is a life of King Louis at Louis X of France. Image:heraldica.org from Base de données Archim

The King is often known as Philip the Fair - Philippe le Bel - on account of his being esteemed by contemporaries to be handsome. The striking effigy at St Denis conveys a curious impression - serene and almost smiling, yet distant and slightly disturbing. There is in it a family resemblance to the effigies of his three sons who succeeded him as King and to the best portrait of his daughter Queen Isabella, in a label stop in the nave of St Albans. However the broad, smiling face was a convention of late-thirteenth and early-fourteenth century French sculpture, such as the Smiling Angel of Rheims.

King Philip IV of France flanked, left to right, by his sons the future King Charles IV and King Philip V, his daughter Queen Isabella, wife of King Edward II, and by his eldest son King Louis X, King of Navarre, and his brother Charles, Count of Valois, father of King Philip VI


I have posted before about the clash between King Philip and Pope Boniface VIII, culminating in the events of 1302-3 in Unam Sanctam and about the King's attack on the Knights Templar in  The deaths of Jacques de Molay and Geoffrey de Charnay in 1314

The conflict with the Papacy and the suppression of the Templars invites some comparisons with the reign of King Henry VIII in England, as does the very public scandal around the adultery of King Philip's daughters-in-law in 1314. There is more about that in the online article at Tour de Nesle Affair.

That in turn was to have a significant effect on the succession to the French crown, with the death of King Philip IV in 1314 being followed by that of  King Louis X in 1316, the birth and death of his posthumous son King John I in the same year, and the deaths of the next two monarchs, the younger brothers of  King Louis, King Philip V in 1322 and King Charles IV in 1328, leaving only daughters whose right to succeed was discounted - that is before the final formulation of the concept of the Salic Law later on in the century - and the inheritance passing to King Philip VI, son of Charles of Valois, and the opening up of the claim of King Edward III of England. There is more about this at the online article Succession to the French throne

By his conflict with King Edward I over Gascony in the 1290s the King had raised English suspicions as to French intentions towards the Duchy which helped to pave the way for conflict in the next century, compounded by the claim to the French throne of King Edward III through his mother, King Philip's daughter Isabella, whose marriage to King Edward II had, ironically, been designed to bind the two realms together in peace.

In preparing this post I incidentally discovered a useful resource and summary on French royal usages and titles, which I recommend to anyone interested at French Royal Family: Titles and Customs

The funeral of King Philip IV at Saint-Denis in 1314 From a 14th-century chronicle  Image:AKG Images / British Library/historytoday.com

King Philip IV is, of course, the eponymous monarch in Druon's The Iron King, the first of his series  of novels in the series The Accursed Kings. These have recently been reissued in paperback and the really splendid ORTF 1973-4 television adaptation can be found on YouTube. I gather the remake of about a decade ago should definitely be avoided, desite its impressive cast.

King Philip IV was a handsome, seemingly detached, remote figure. The events around the deaths of his older and younger brothers Louis and Robert in May 1276, and the suspicions of some that they had been poisoned by his stepmother, may account for his reserved nature. Famously described by the Bishop of Pamiers who said of the King "He is neither man nor beast. He is a statue" he remains something of an enigma. The debate continues as to how far he controlled policy and how much that was the work of his ministers - again rather like King Henry VIII in England. His detachment and restraint - he appears to have been faithful to his Queen, and did not remarry after her death - and his concern for the royal dignity of his office - suggests an austere personality. Supremely concious of his kingship in his last days he was concerned to ensure the faithful transmission to his heir of the specifics of the touching for the King's Evil. His reign, and that of the last of the direct line of the Capetians, is a fascinating period to study, an era of extremes, a turning point in French and European history.