The Duchess of Alba

The news yesterday of the death of the Duchess of Alba at the age of 88 marks the end of a colourful life led by the head of one of the greatest aristocratic families of Europe.

There is anonline account of her life and her list of titles - she held more than any other living person - and honours at Cayetana Fitz-James Stuart, 18th Duchess of Alba

I first became aware of the Duchess when she was interviewed by Alan Whicker for one of his television series in the 1960s, and that included the Duchess turning up to lend her diamond tiara and other jewellery to the statue of the Virgin Mary for a religious procession in Seville.

The title is a 1472 creation by King Henry IV of Castile and as the website Duke of Alba with its links to biographies of holders of the title explains the Fitz-James Stuarts are the third family to hold the dukedom. There is also an introduction to the history of the family at the websie on the House of Alba.

Last year there occurred the death of the Duchess of Medinaceli, who was featured in Robert Lacey's Aristocrats television series and book. She was 96, and also the 18th holder of a ducal title, in her case one granted in 1479 by King Ferdinand and Queen Isabella. The Daily Telegraph obituary recorded that


"The Duchess should, perhaps, have earned a place in the Guinness Book of Records as the most titled human being on earth, but instead the accolade went to her colourful cousin, Cayetana, Duchess of Alba — a woman known for her valiant efforts to hold back the depredations of time with cosmetic surgery. It is said that when the publicity-shy Duchess of Medinaceli discovered that she was to be listed in the popular reference work, alongside assorted freaks and daredevils, she petitioned the king to be allowed to pass on 17 of her titles to her sons.

She felt that the Duchess of Alba, “with her English blood” (the Albas are directly descended from the Duke of Berwick, the illegitimate son of James II by Arabella Churchill, sister of the Duke of Marlborough), would enjoy the publicity." 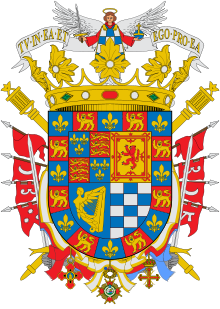 The arms of Cayetana, 18th Duchess of Alba
The swords and crossed batons signify the hereditary posts of
Constable of Aragon and of Navarre and of Marshal of Castile