Insignia of the Order of St Patrick

I very much regret that it was allowed after 1922 to fall into abeyance, with only Royal Knights being appointed until 1936, and none since, the last one, the late Duke of Gloucester, dying in 1974. I think it should have been revived, and should be revived - why should this not be done with the forthcoming state visit of the President of the Irish Republic and make him an Extra Knight of the Order?

A quick trawl on the internet produced a considerable number of pictures of the insignia of the Order. There is a wonderful collection of images of the insignia, as well as some of the Officers and Knights, here. Some of the others I found I have copied and pasted in this post.

This example of a diamond star  from the Royal Collection appears to have been made in 1838 for Queen Victoria by Rundell and Bridge :

Star of the Order of St Patrick

King George V's Diamond Star
Made around 1890, the  centre has a shamrock of emeralds, with the Saint's cross in rubies on a diamond background. 'George, Prince of Wales, April 1910' is engraved on the reverse.


Another jewelled badge of the Order

The website these last three illustrations comes has an interesting section on the Order and on the theft of the Irish Crown Jewels - the insignia of the Lord Lieutenant as Grand Master of the Order - in 1907, which can be seen here.

Two stars of the Order were sold in the Harewood: The Attic sale at Christies South Kensington on  December 9th 2012:


Price Realized is hammer price plus buyer’s premium and does not reflect costs, financing fees or application of buyer’s or seller’s credits. 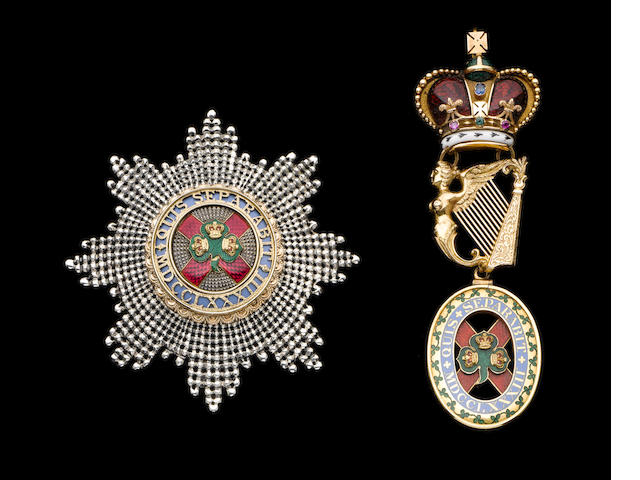 The riband and  badge 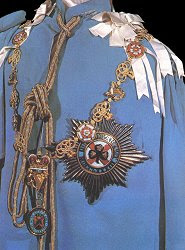