The King of the Hellenes

Last week, on March 6th, there occurred the fiftieth anniversary of the accession to the Greek throne of King Constantine II upon the death of his father King Paul I. There is an online biography of the King here, and the website for the King and his family can be viewed at Royal Greek Family 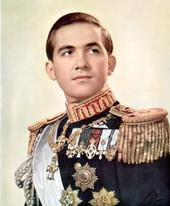 The King of the Hellenes at the time of his accession


Unlike other of his relatives amongst European monarchs he will not be able to celebrate this jubilee as the effective reigning monarch of his kingdom, although last year he returned to live in Greece as can be read here.

The political instability and factionalism the Greek monarchy was intended to counterbalance with the election of King George I in 1863 managed to overwhelm the King and his cause in the years bothe before the 1967 coup, in the years following and in the scramble for power in 1974. This has proved both a real personal tragedy for the King and his family, and contributed to the problems of the country. It is not that the King or the institution of the monarchy could of themselves have prevented the economic problems of contemporary Greece, but that they could have provided stability to a country where their absence enabled politicians to pursue wild schemes with fewer restraints than otherwise. Greek politicians who were anxious to destroy the monarchy have shown a remarkable ability in passing on political leadership to their own children as an almost hereditary caste. There is, to my mind, a real sense of waste in the fact that for so many years the King has not been able to exercise his proper constitutional and public role in the life of his country.


The King is, I think, entitled to believe that his case has not been heard by many of his people, and to feel not only hurt at rejection when he sought to fulfill his constitutional obligations, but that the hopeful mood which accompanied both his accession and his marriage in 1964 did not yield a richer harvest for him and his country.

King Constantine II of the Hellenes and Queen Anne Marie.