Today being the anniversary of the battle of Agincourt it seems an appropriate one on which to comment on a fairly recent biography of the victor, King Henry V. Recently I have been looking again at "Warrior King" by Keith Dockray, which is published by Tempus. 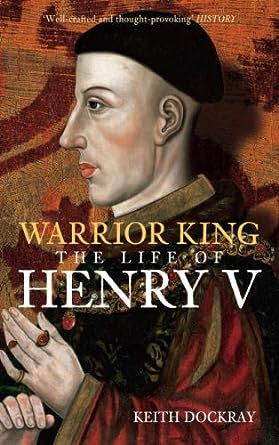 It is useful, indeed valuable, contribution to studies of the reign, and well worth looking at, although it is pity the publshers did not use better quality illustrations to accompany the text.

The author sets out at the beginning specifically to be conciously more critical of the King's achievements than have been historians such as say K.B.Macfarlane or Christopher Allmand. There is nothing necessarily wrong in that, although it would not necessarily be my opinion. He certainly raises the question - ultimately unaswerable  - as to whether the King could ever have succeeded in his French plans.  They may well have been unattainable, but King Henry V did show a remarkable ability to make things happen and to happen as he wanted them to.

Occasionally however this approach does seem to lead Dockray to what becomes a rather selective use of language. Thus, writing about the King's non-appearance at his Queen's coronation at Westminster in 1421 the author suggests that Henry was not interested in such "junketings". That, to my mind, misses the point about Kings usually being absent from such a seperate coronation of their consorts, so as to leave the Queen centre stage - as with Margaret of Anjou in 1445, Elizabeth Woodville in 1464, Elizabeth of York in 1487 and Anne Boleyn in 1533. The King might well be there, but hidden away in a royal pew,so as not to divert attention from her.Furthermore as King his sense of the importance of ceremony appears clear. Queen catherine's coronation indeed appears to have been an impressive occasion, and demonstration of the unuin of the dynasties and crowns.

The book is divided into three parts - the historiography, life, and the author's assessment of his subject. I was struck by the way in which the historiography is surprisingly consistent whether contemporary English or French writers or later historians using those same sources - a consistent portrait emerges. The difference lies more in the attitude of the different writers to the King they are describing, and thus reveals more about them rather than modify the image of King. Individual historians may or may not like or admire King Henry V, but he himself emerges true to the record - a disciplined, austere, intelligent man, gifted in the art of governance, well able to assert his authority and command men, a man able to lead. Whether what he sought to do was practicable, possible or desirable may be open to discussion, but that he stamped his presence on his contemporaries and the enduring national conciousness (not least thanks to Shakespeare) is unquestionable.