Yesterday at the Oxford Oratory the 11am Solemn Mass was a celebration of the Beatification of Bishop Salvio Huix-Miralpeix a fortnight ago in Tarragona. The Oratory website's illustrated report on those  ceremonies in Catalonia can be read at Beatification of our First Martyr. I wrote about the subject in my recent post The Spanish Martyrs. 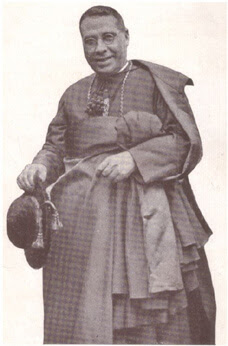 It was highly appropriate that the impressive red vestments worn by the sacred ministers were Spanish - the dalmatic and tunicle have the distinctive feature of the collarette, which I assume originates in an apparel for an amice - and the music was by Spanish composers, the Mass setting itself being by Tomas Luis de Victoria.

In his sermon Fr Dominic, who has long had an interest in the story of Bl. Salvio, told the congregation of the life and martyrdom of the Oratorian who became Provost of the Oratory at Vic and then Bishop successively of  Ibiza and Llerida, and put it in the wider context of both the other martyrs of Spain and St Philip's attitude to sanctity and martyrdom amongst his sons.

The Mass concluded with the singing of the Te Deum in honour of the Beatification. At Mass we were given prayer cards with the Collect for Bl. Salvio, whose feast day is November 6th:


Almighty and eternal God, who

in your goodmess bestowed on the
bishop and martyr Salvio Huix the
gift of pastoral charity even to the
point of shedding of his blood for
Christ and his Church; bestow on us
also the grace to work faithfully in
your vineyard and to experience his
intercession in this life.

Through our Lord Jesus Christ your Son,
who lives and reigns with you,
in the unity of the Holy Spirit, one God for ever and ever.
Amen