Today is the 220th anniversary of the death on the guillotine of Queen Marie Antoinette in 1793. 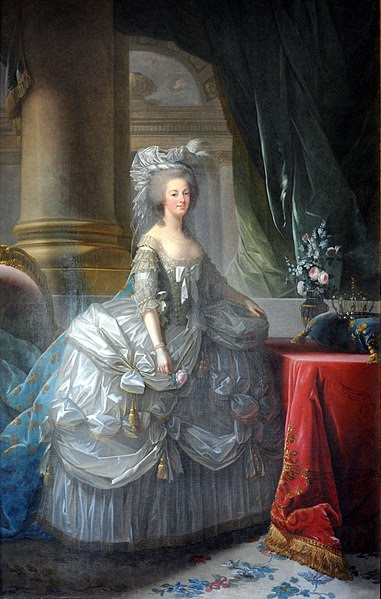 There is a good online narrative life of the Queen, which appears balanced and fair, and has a good selection of portraits, here. This deals with many of the allegations - usually complete calumnies - levied against her, both before 1789, and certainly after the collapse of the old order. For a variety of reasons she became an easy target for anti-Austrian, anti-Court propagandists, and for scurrilous gossip and speculation of the wildest and worst kind. The Queen's final years, and certainly the last thirteen months from September 1792, were a living nightmare, and her fate, and that of her husband and son, a lasting reproach to those who caused it and to those who defend the French Revolution.

Whatever her shortcoming and failings - and such as they were they were by no means untypical of her age, culture and context, and most of them appear to have been youthful indiscretions as a teenage Dauphine in the highly sensitive and gossip ridden world of Versailles - she was also a dutiful Queen, wife and mother. As the Ancien Regime unravelled after 1789 she, like the King and virtually everybody else, was unable to pick with any confidence a way through the shifting political waves - as their world fell about them the King and Queen were left increasingly vulnerable and defenceless to the onslaught - as Edmund Burke witnessed to his horror

The excellent blog Tea at Trianon concentrates of the life of the Queen and seeks to inform, as well as to correct the calumnies that have been persisted about her. I think the alleged remark about those asking for bread "Let them eat cake" is less often quoted these days - it was a line sometimes attributed  to Queen Marie-Therese, the wife of King Louis XIV, more than a century before Queen Marie-Antoinette's time. However it originated in a fictional piece by Rousseau, published in the mid-eighteenth century, and teh remark is delivered by an unnamed, and entirely fictional princess; this was published several year before the then Archduchess maria Antonia left Austria to marry the Dauphin Louis in 1770.

I believe the London Oratory has a tradition or custom of celebrating a Requiem Mass for the Queen on this day, and a definite cult of remembrance at least has flourished since the Bourbon Restoration, and the time of her and the King's reburial at St Denis.

The cult has led to memorabilia, books - good, bad and indifferent - films and myths; her terrible fate has become part of the conciousness of the western world.

I have visited the Chapelle Ardente in the Conciergerie in Paris on the site of the cell where she spent her last days which was created by King Louis XVIII, and also seen the striking mosaic in the apse of Sacré Cœur where together with King Louis XVI and King Louis XVII she is to be seen at prayer in the presence of Christ.

Of that more specific religious cult Nancy Mitford recounts the story of how with a companion she visited a house or collection devoted to the Queen's memory. When the visitors appeared a little critical of the Queen the curator responded forcefully that "La Reine etre une Sainte!" The Hon Nancy was wryly amused, but the King and Queen do deserve serious cosideration as Christian victims, rather as (part at least) of the Russian Orthodox Church have designated Emperor Nicholas Ii and his family as 'Passion bearers'

One of the more remarkable artifacts of the memorial cult was to be seen here in Oriel where a more than life-size terracotta bust of the Queen graced the rooms of a a now retired History Fellow, where it sat in the perpetually unlit hearth (there being no where else to place so large and grand an object) - undergraduates would surely get the message as to the attitude of their tutor to revolution.

Thank you very much for the link!