Were today not Sunday it would be the feast day of St Edward the Confessor. Here in Oxford he is of interest not only as a national patyron but as a local man - traditionally he is believed to have been born at Islip, just to the north-east of the city.

To mark the day here is a picture of the design by Edward Welby Pugin (1833-1875), son of A.W.N. Pugin, for the Catholic cathedral of St Edward in Liverpool. 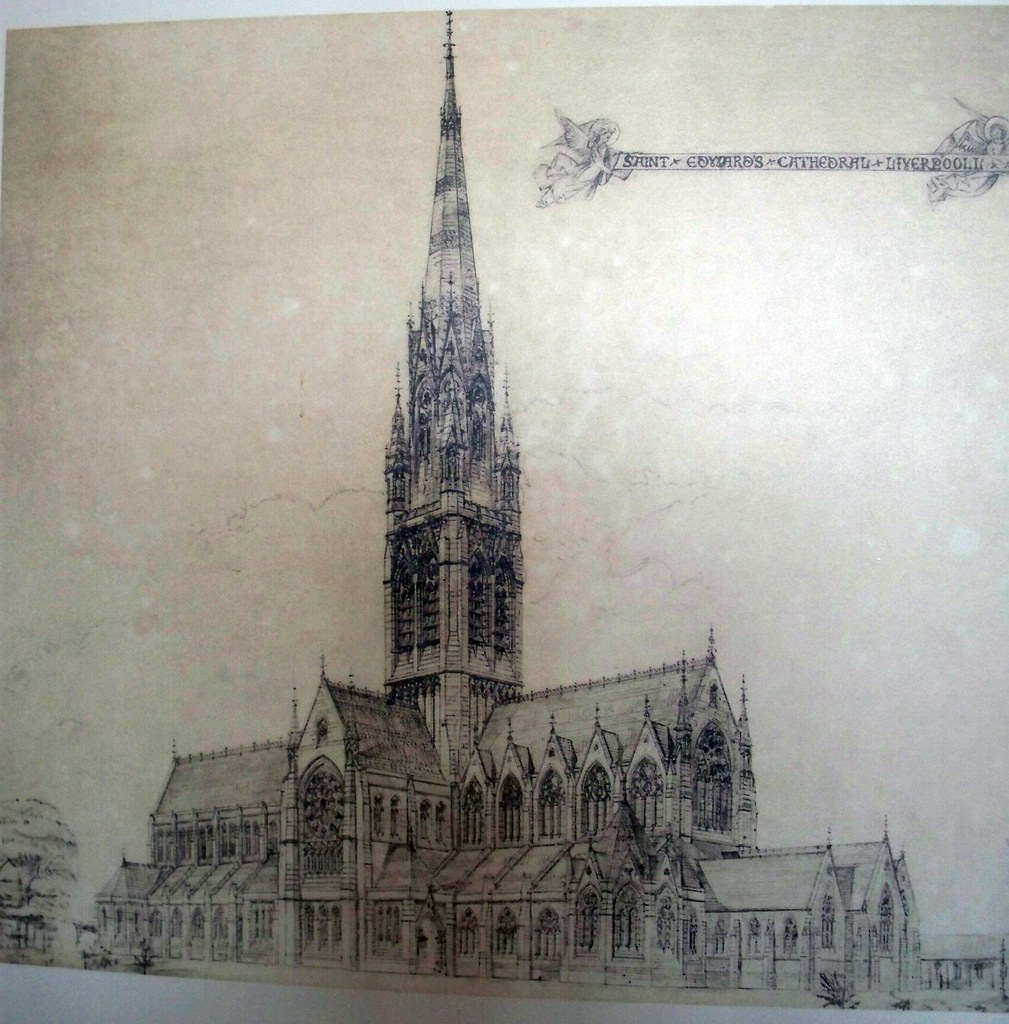 The first Bishop of the new diocese of Liverpool was George Brown, until then Vicar Apostolic or administrator of the Lancashire District of the Catholic Church in England. His co-adjutor Bishop was Alexander Goss. As a young priest Fr Goss had been a teacher and subsequently Vice-President at the junior seminary for the training of priests which had been set up in 1845 within the walls of one of Liverpool's older mansions, San Domingo House. Built by a successful merchant, this stood on a ridge in Everton, commanding a view of the north docks, the Mersey and the Wirral peninsula.

The Catholic population of Liverpool increased dramatically following the Irish potato famine of 1845, and the restoration of the hierarchy in 1850 gave Catholics a new status and feeling of confidence. It was no surprise therefore that Bishop Goss saw the need for a cathedral. He also saw the ideal site in the grounds of the College at Everton. By 1840 the estate was in the hands of the Roman Catholic church in advance of the establishment of the Catholic diocese of Liverpool in 1850, and in 1842 a Catholic 'classical and commercial school' had been established there, and dedicated to St. Edward. This ultimately became St. Edward's College, which retains links with the present cathedral.

The commission to design a Catholic cathedral for Liverpool was entrusted in 1853 to Edward Welby Pugin (1833-1875), son of Augustus Welby Pugin, who had died in the previous year.  It is a tribute to the younger Pugin that at the age of twenty he could produce so impressive a design, and to his father's example in providing him with the inspiration.

The design was a bold one dominated by a central tower with a 300 ft. spire, would have been easily visible from North Wales, situated as it would have been near the top of Everton Hill. The overall scheme and plan appear to have been influenced by Salisbury cathedral, although apart from the Lady Chapel in Early Decorated style, the design appears more Curvilinear Decorated, with Perpendicular elements in the tower - just as such a building might indeed have developed in the English middle ages. The gabled clerestory windows of the choir appear to derive from buildings such as Cologne cathedral and perhaps in part from Tewkesbury abbey, and were to be a motif used by the younger Pugin in his work at Belmont abbey and by his father at Ushaw in the apse of the chapel of 1847, and elsewhere. The way the transepts are flush with the aisle walls suggests the medieval cathedral in Glasgow as a source.

Within three years a usable portion of the building was completed with the construction of the Lady Chapel, with an entrance built into the surrounding wall of the College.


However it is said that when the Bishop arrived and saw what was being done, he exclaimed, "We don't need a cathedral. We need schools. Build schools and we shall then be able to fill a cathedral!"
This is reflected in the fact that the attention of the diocese was and continued to be concentrated on more pressing needs, the building of parish churches, schools and orphanages as the Catholic population increased. This also reflects the priorities of the Church in England as established in the early years of the hierarchy by Cardinals Wiseman and Manning.


The Lady Chapel however survived and served as the church of the local parish of Our Lady Immaculate until the 1980's, when, weather-beaten and structurally unsafe, it was, regrettably,  demolished. 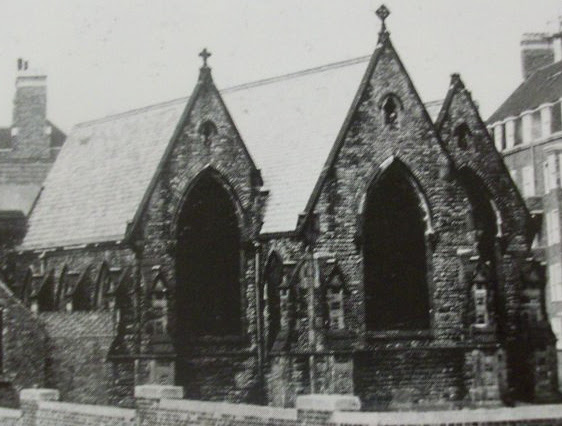 Our Lady Immaculate as a parish church

In consequence St Edward's Cathedral was never completed. In 1933 a vast and complex new cathedral designed by Sir Edwin Lutyens was begun on Brownlow Hill and thirty seven years later the building, having been scaled down in plan was replaced by a design by Frederick Gibberd, was completed and became the Metropolitan Cathedral of Christ the King.

The failure to build the Pugin design is in many ways to be regretted. It looks as if would have been a splendid building for the diocese and an example of skilled Victorian Catholic Gothic revivalism. An example of what might have been, and indeed perhaps should have been.

Our Lady Immaculate in its last years

With acknowledgements to the website of Liverpool Roman Catholic Metropolitan Cathedral
and to emanuensis.byinternet.co.uk