Four generations and a baptism

The baptism of Prince George of Cambridge on Wednesday received more attention from much of the media than has been usual for royal christenings, even those of children in the direct line of succession to the throne.

Part of the reason is that for the first time since 1894 has there been the opportunity to photograph the Monarch with three direct male heirs, spanning four generations. That is the historic image from the occasion, and a very good and positive one too. 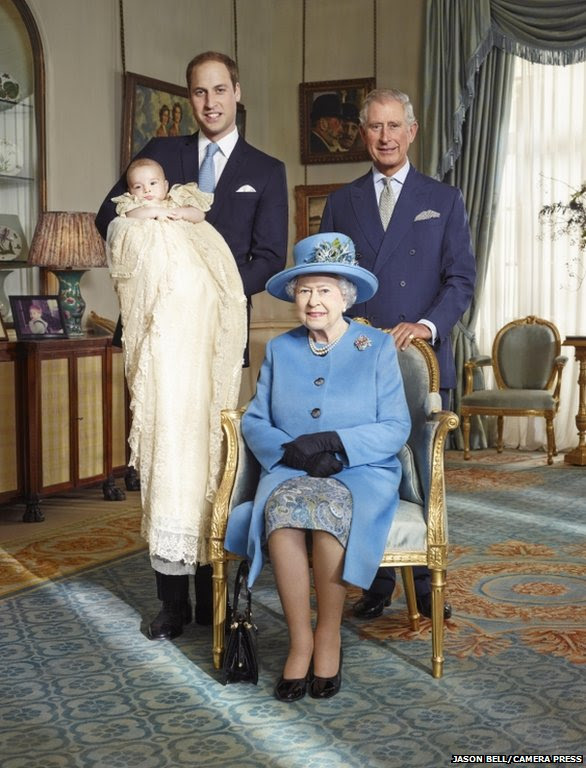 The baptism of a royal infant here is not as public as in some monarchies, such as the Netherlands or Sweden, and represents the tradition of it being a private family occasion first and foremost, with public photographs released afterwards, as were the official pictures today.

Much speculation and significance has been assigne dto the choice of godparents. It is somewhat different from previous generations - friends of the parents rather than royal or public figures, but it is not that different. Traditionally a godparent was not a close relative, and the idea was to establish a new spiritual family for the child. In this case it may mean the godparents will have more time to discharge their responsibilities than if they are high profile members of royal families or highly place public figures.

Certainly the choice of older godparents, such as the Duke of Connaught in 1926 for the present Queen, when he was the last surviving son of Queen Victoria, and born in 1850, with the great Duke of Wellington as his own godfather, was aa way of linking Princess Elizabeth to her forebears. Similarly the choice of King Haakon VII in 1948 as a godfather to the Prince of Wales linked him to King Edward VII's son-in-law and to the Danish-Norwegian Glucksburg house. That and the photographs of the Prince on his mother's lap between two of his great-grandmothers, Queen Mary and the Dowager Marchioness of Milford Haven ( born a Princess of Hesse-Darmstadt and by the Rhine, and sister to the Empress Alexandra of Russia ) all helped to stress continuity and contact. So there is a lot to be said for such things. The image of four generations is very much in that tradition.

Who was or, more significantly, it is suggested was not invited has caused some, indeed quite alot of comment. Ity may signify something, and it may not - practical considerations nmay well lie at the root of that.

The choice of the Chapel Royal at St James's Palace rather than the Music Room of Buckingham Palace is in many ways more suitable. First of all, it is a proper place of worship, and an historic one. It  dates from the sixteenth century, has the heart of Queen Mary I buried within it, was where King Charles I received communion on the day he was martyred, witnesses the annual Royal Epiphany service, was the scene of the wedding of Queen Victoria and King George V, of the vigil by the Princess of Wales' coffin in 1997 and of the Duchess of Cambridge's confirmation. So a lot of Royal ghosts were hovering in the shadows this last Wednesday.