Very unfortunately early on the morning of last Wednesday, October 2nd, the feast of the Guardian Angels, the very attractive statue of St Anthony of Padua in the church of the Oxford Oratory caught fire and was severely damaged - probably beyond all hope of repair. The statue has been in the church for many years and has been a popular focus of devotion and requests for St Anthony's intercession, and is a sad loss. The cause of the fire appears to have been a votive candle at his feet which initially charred the wooden statue, which then burst into flames. 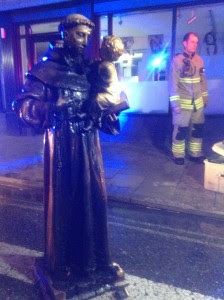 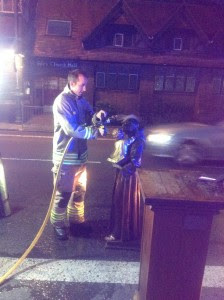 Very fortunately the fire was discoverd before it could spread further, no-one was injured, and no other damage was done to the church.

As the Oratory website says we should all give thanks to the Guardian Angels for watching over us. One parishioner said a friend of hers opined that St Anthony took the hit on behalf of the church, which is, of course, suitably saint-like.


The Oratory will be reviewing its safety procedures, and hopes to replace the statue of St Anthony as soon as this can be arranged.