The death of the Emperor Henry VII


Today is the seven hundredth anniversary of the death of the Holy Roman Emperor Henry VII in 1313. There is an online life of him here.

Apparently elected to prevent a French candidate becoming Emperor, largely at the instance of his brother Baldwin, the Archbishop of Trier, Henry was elevated from a fairly minor position as Count of Luxembourg to a position of enormous prestige but uncertain authority. His attempts to make that authority tangible dominate his short reign, and helped establish his family for the next century and a half amongst the great ruling dynasties of Europe. 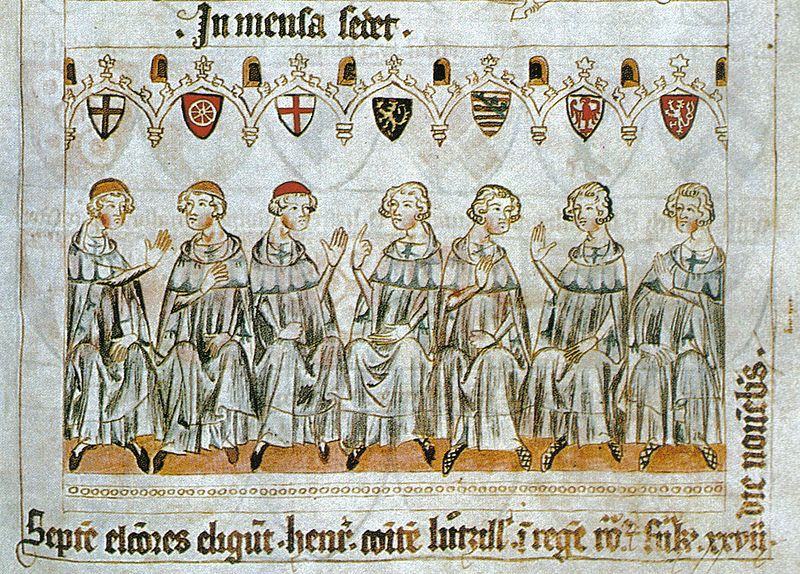 "The seven electors choose Henry, Count of Luxembourg, as King of the Romans at Frankfurt on the 27th day of November."
The electoral princes, identified by the coat of arms above their heads, from left to right are the Archbishops of Cologne, Mainz and Trier , the Count Palatine of the Rhine, the Duke of Saxony, the Margrave of Brandenburg and the King of Bohemia. 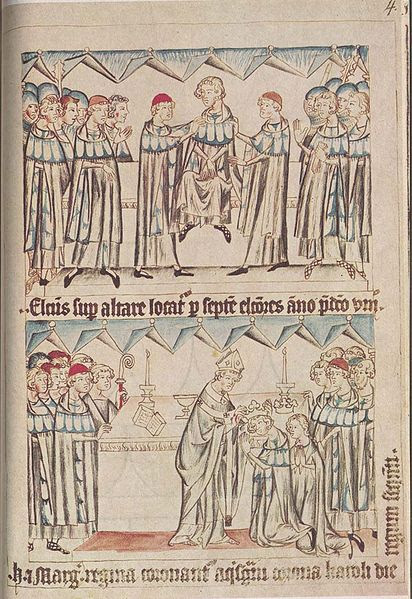 The election, enthronement  and coronation of Henry as King of the Romans

Pen-and-ink miniature from the picture chronicle of Emperor Henry VII, the Balduineum. The drawing, on parchment, dates from 1341
Federal State Record Office in Koblenz.
Images: Wikimedia

Having been elected with six votes at Frankfurt on 27 November 1308 Henry was subsequently crowned as King of the Romans at Aachen on 6 January 1309 - the Epiphany was an eminently suitable day to choose for a coronation - and it was on the same feast in 1311 that he received the crown of Lombardy in Milan.
His expedition to Italy both for that and his Imperial coronation on June 29 1312 (SS Peter and Paul) and to assert Imperial rights in the north of the peninsula was one of the last, perhaps indeed the last, real attempts to re-establish the Holy Roman Empire in Italy. It was in connectuion with this campaign that Dante wrote De Monarchia as an argument for the rule of a Universal Emperor who could bring peace and reconciliation. Whatever the likelihood of that in the early fourteenth century the death of the Emperor marked the end of the project. 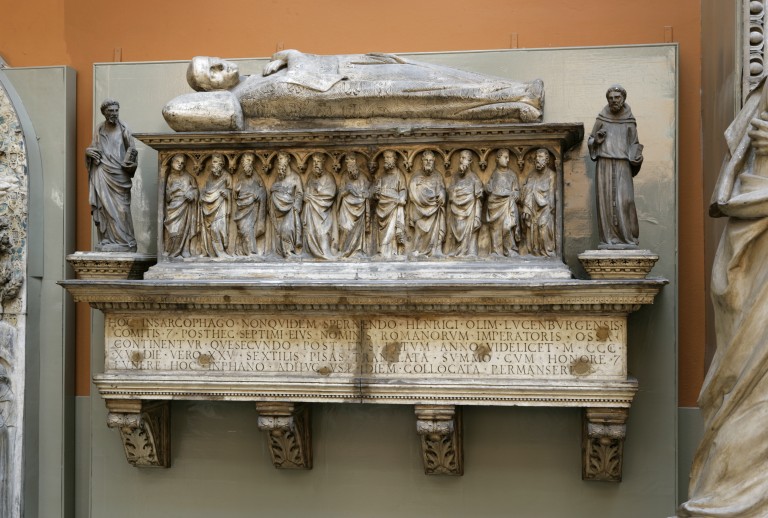 The Emperor Henry VII died near Siena on St Bartholomew's Day, August 24th, 1313. His tomb was completed in February 1315 and was completed within the stipulated six months. It was installed in the tribune behind the high altar, but has suffered slow dismemberment through several removals. For the tomb of Emperor Henry VII, Tino signed the contract in February 1315, a little more than a year after the Emperor's sudden death during his expedition from Pisa to destroy the power of Robert of Anjou in Naples. The tomb was completed by the end of July. However, it was later dismembered, the sarcophagus itself, with the recumbent effigy is still in the cathedral, and the free-standing figures of the Emperor and four of his councillors, together with some minor figures likewise in the Camposanto.

The original appearance of the monument was thus far more elaborate than either the cast in the Victoria and Albert Museum, or the present arrangement in the cathedral at Pisa.

In both cases, only the effigy and the arcading containing eleven (originally twelve) apostles are preserved in their original relationship. Here, as in Pisa, the inscriptions and the consoles of the lower part date from 1494, when the tomb was removed to the chapel of San Ranieri. In the cast shown here, the lateral saints, Peter and Francis, probably date from the early 15th century and the originals of these figures are now in the Cathedral repository. At Pisa, their place is occupied by an Annunciation group from Tino di Camaino's workshop: the Virgin and Gabriel had been installed on either side of the effigy as early as 1829. The Annunciation may have formed part of the original monument, but would not initially have occupied this position, which most likely held angels drawing back curtains to reveal the effigy. 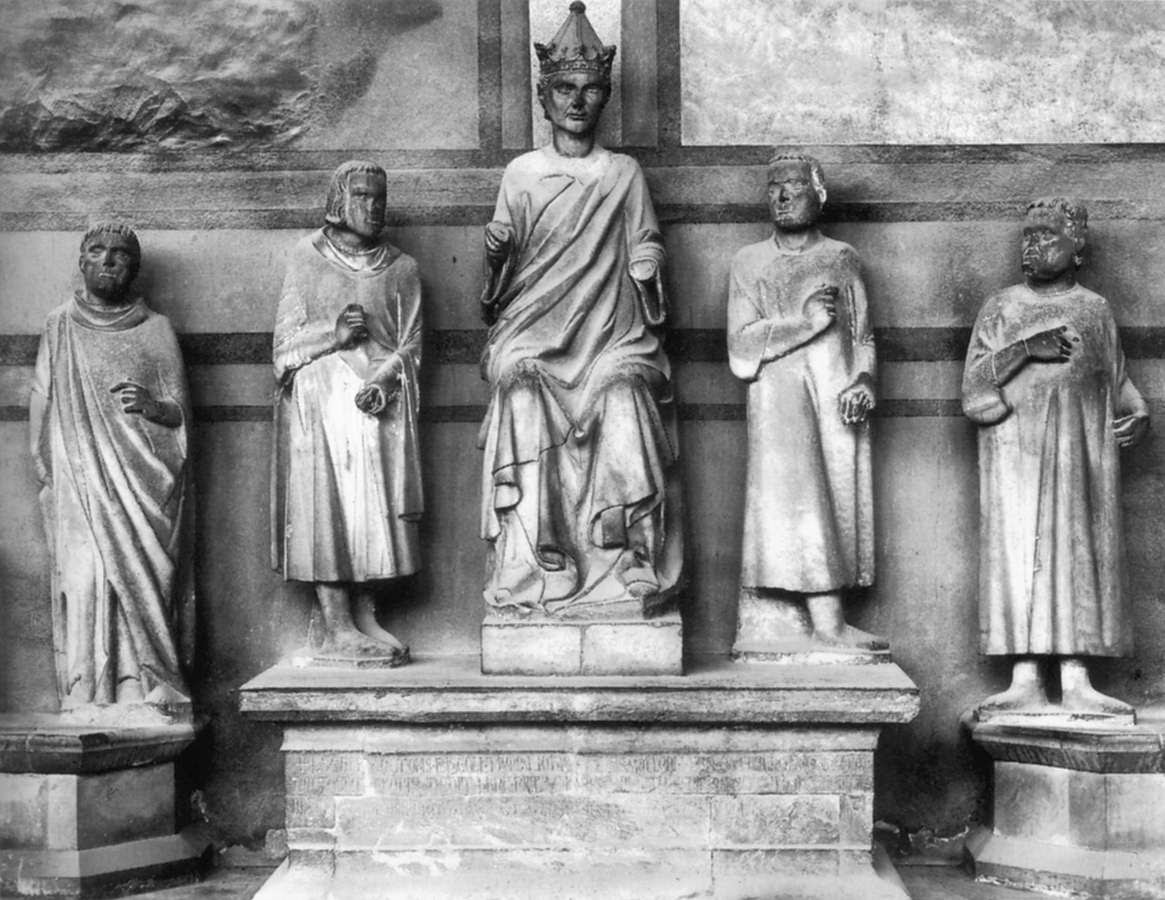 Among the principal figures which have been identified as belonging to the original scheme are a group comprising the seated figure of the Emperor Henry VII and four standing Councillors, now in the Camposanto, but which might once have been arranged above the gisant.


It has also been established that there was below the tomb a related altar dedicated to St Bartholomew. which might have supported a group by Tino da Camaino including a central Madonna and Child ( now in the Museo Civico, Pisa ) and a figure of St Bartholomew (now in storage in the Cathedral).

That the Emperor died on St Bartholomew's feast day had an additional poignancy in that it was in the church of St Bartholomew in Frankfurt - the so-called Kaiserdom - that Kings of the Romans were elected and enthroned, as in the second illustraion from the Balduineum by being seated on the altar. I assume this derived from the offertory at Mass - rather as it appears the Stone of Scone in Scotland was originally a portable altar.