Yesterday I once again led a group of students from the CBL International programme at Oriel on a tour of Legal London.

When we had finished I found myself outside the Temple Church, which, unlike the situation on most of my previous visits was open, so I paid my couple of pounds and had a leisurely walk round this remarkable survival from the twelfth and thirteenth centuries. 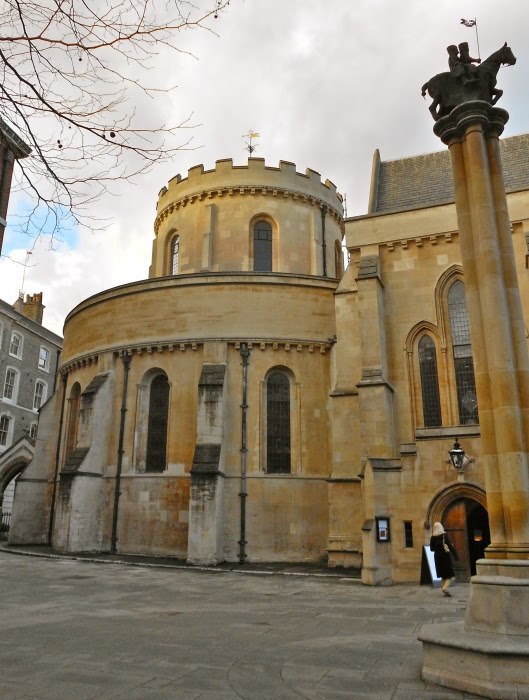 The round nave of the Temple Church, with the choir to the right.The column in the right foreground is a modern memorial to the Order of the Temple erected by the Inns.
Image: roundaboutlondon.wordpress.com
The late twelfth century round nave, built by the Knight Templar and modelled or inspired by the Church of the Holy Sepulchre in Jerusalem, together with the now replaced choir, was consecrated on February 11th 1185 by Patriarch Heraclius of Jerusalem, as is recorded in a Latin inscription over the west door.

In the nave are series of  effigies of nobles with connections to the Order, the most famous being that of
William the Marshal Earl of Pembroke who died in 1219 as Regent of England for the young King Henry III. His career is recounted in the Song of William the Marshal written soon after his death. Unfortunately the effects of the bombing in 1941 resulted in some damage to the effigies, as can be seen from displays of older photographs in the church, but they are still very moving as a record of part of the elite of thirteenth century England.

The chancel was replaced by a larger aisled one in 1240, apparently with the intention of it being the burial place for King Henry III and his Queen. Although one of their infant sons is buried there it was of course his rebuilding of Westminster Abbey from 1245 that led to that becoming the medieval royal necropolis.

The view from the nave into the choir

Image: a-london-tourist-guide.com
Inside the church are reconstructed plans of the site as it is thought to have been when used by the Templars before their suppression in 1312. One thing I learned from these was the fact that the Knights had their jousting or training ground on what is now the site of the Royal Courts of Justice.

Transferred to the Knights Hospitaller after 1312 and seized by the Crown in 1540 the church was formally given to the tenants of the buildings adjacent, the Inns of the Inner and Middle Temple by King James I  in 1608, on condition that they maintained the building, which they have done. On display in the church was a photograph of a charter of renewal of the grant from the present Queen in 2008.

On May 10th 1941 the church and both Inns suffered bomb damage, which was graphically brought out by some of the photographs on display. The devastation of the Inner Temple was particularly serious, which lost its nineteenth century Hall and many adjacent buildings, and the church itself was burnt out.

The post-war restoration, completed in 1957, is  good, though I perhaps regret that the mid-nineteenth century neo-medieval colour scheme was not reproduced - that is no doubt more what would have been there originally. However the restoration did allow for the reinstatement of surviving seventeenth century furnishings removed in the Victorian period and preserved in storage.

There is more about the church and its history here.

The Chaplain bears the title Master of the Temple and like the church belongs to both Inns. One of his late sixteenth century predecessors, who is  commemorated by a modern monument in the church, was Richard Hooker, the codifier of Anglican ecclesiology.


The church is very well worth seeing, as indeed are both of the two Inns, and the other two which are north of the Strand, Lincoln's and Grey's.