The Beheading of St John the Baptist

Today is the feast of the Beheading or Decollation of St John the Baptist.

This has attracted artists over the centuries and I post the other year about a late medieval depiction of his death in  The Decollation of St John the Baptist.

The nineteenth century French artist Pierre-Cécile Puvis de Chavannes (1824-98) produced two striking images of the death of the Great Forerunner, both of which are now in this country in the collections of the National Gallery - although it is not on display - and at the Barber Institute in Birmingham.There is another online piece about Puvis de Chavannes, who was working in the style termed Symbolism, here.

The paintings both date from 1869 and are curiously memorable, with a somewhat hypnotic quality to them, evoking a rather horrible fascination with the event. In both the stasis, the serenity, of the Saint is in striking contrast to the sweeping action of the executioner. 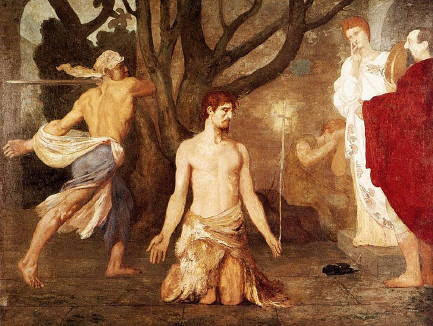 Image:christchurchwindsor.ca
Salome's features are here thought to be based on those of the Princess Cantacuzène, who married Puvis de Chavannes in 1897. The figure of Herod standing on the right may be based on the novelist Anatole France.

The cross which Saint John the Baptist holds as the executioner prepares to strike is the focus of the composition. The static character of the design is mitigated by the figure of the executioner, recalling comparable figures in Delacroix and Chassériau.

Probably unfinished, this painting remained with the painter until the time of his death.
Adapted from the National Gallery website

A related composition is now in the Barber Institute in Birmingham, and is, I think more effective and haunting - a piece I read about it in the Daily Telegraph some years ago, which first introduced me to the painting, when it was on show in London argued that this was the more considered, indeed sophisticated, and striking of the two paintings. 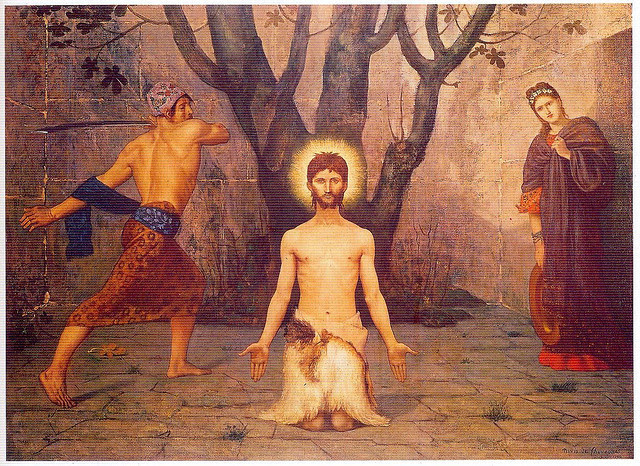