Today is the 525th anniversary of the death in 1483 of King Louis XI of France.
As King he was contemporaneous with King Edward IV in England, and he was a not insignificant player in the background to events in the Yorkist era. His posthumous reputation has often been characterised by the description of him as the Universal Spider, drawing his opponents into situations from which they could not escape, and which the King operated to his political advantage. He is frequently seen as a rather sinister figure, cold and calculating, cynically and successfully eliminating rivals and adversaries. 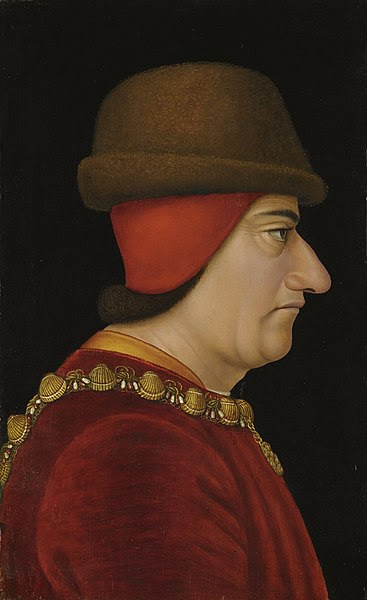 King Louis XI
Image: Wikipedia
That view is true in part, but the King faced enormous threats to the unity of his kingdom for most of his reign. He succeeded his father King Charles VII in 1461, only eight years after the occupation of the remaining English territories in Gascony, and not until 1477 was the very real threat posed by Duke Charles of Burgundy in the north-east and east of France and in the Low Countries removed by the death of the Duke in the battle of Nancy. In order to survive, and, seemingly, for the kingdom to survive, King Louis had to be a schemer, fending off threats from family, friends and foes alike. He may not have been the most attractive of personalities, but he was an able and shrewd King of France who maintained and enhanced the unity of the realm. That unity was always fragile, both before his time, and again in the sixteenth century, when weakness at the centre allowed regional interests to assert themselves.
Paul Murray Kendall's biography of the King is one of the best books by that popular author of readable studies of the later fifteenth century, and brings before the reader the crises the monarch faced and surmounted. One thing it brings out is the extent to which King Louis XI was lucky - the failures the English Yorkists and Charles of Burgundy brought upon themselves played into his hands, but he was often the fortunate recipient of  such events, but, of course, well able to play the resulting situation to his own advantage.

Unlike King Edward IV and Duke Charles King Louis was not a glamorous or striking figure, but rather a monarch who behind a rather unimpressive public persona had a keen mind and a steely determination to achieve his objectives - most of which he did indeed do.