The Battle of Tagliacozzo

Today is the 745th anniverasary of the battle of Tagliacozzo in 1268 when the forces of Charles of Anjou, King of Sicily, defeated those of Conradin, grandson of the Emperor Frederick II and ended his attempt to seize his ancestral territory of Regno back from the Angevin who had defeated and killed King Manfred - Conradin's illegitimate uncle- two years earlier at Benevento.
Conradin had been born in 1252, two years after the death of his grandfather Emperor Frederick II, and was only two when his father King Conrad IV died. The Sicilian crown was administered and then assumed by Manfred, an illegitimate son of the Emperor. In 1266 he was defeated and killed at Benevento by the French Charles of Anjou who had papal backing - the Pope's continual fear was the union of the Empire and the Regno  leaving them squeezed between the two territories.
The Ghibelline (Imperialist) cities of northern Florence, also fighting against the Pope traveled to Bavaria to convince Conradin to launch an Italian campaign. Following Manfred's death Conradin, who was only 14, decided to enter the fight to claim his Italian inheritance. The example of his grandfather's campaign to establish himself in germany as ateeneager  "the boy from Apulia" doubtless influenced him. Conradin, of whom one contemporay source reports that he was "beautiful as Absalom, and spoke good Latin",  pledging his lands and crossed the Alps from Bavaria with his uncle Duke Louis.
Conradin encountered many difficulties. His uncle Duke Louis and other companions returned to Germany. Pope Clement IV threatened him with excomunication. Money was very limited to finance his army. Nonetheless he proclaimed himself King of Sicily and his supporters in both northern and southern Italy took up arms in his name. The people in Rome received an envoy he dispatchesd with some enthusiam.
Conradin had by 1267 a party of 3000 knights with whom to campaign and travelling from Ravensburg moved to Verona, where he published his manifesto in which he stated his claim to Sicily, and then on to Pisa, Siena, and Rome in 1268. These were all towns favourable to the Ghibellines and as King Conradin was enthusiastically received in Pavia and Pisa. In November 1267 the Pope had excomunicated him, like his grandfather (on many occasions), father, and uncle. Conradin's fleet achieved a victory over that of Charles of Anjou who after Manfred's death had taken control of Sicily with the Papal blessing. In July 1268 Conradin entered Rome with great popular support . Together with his army he departed from Rome to move south on August 18 planning to  join with Saracen forces at Lucera - the colony established for the Sicilian saracens by Frederick II. They believed that the fight was already won and were preparing plans as to how Sicily should be divided. It was at this point they met Charles's forces at Tagliacozzo on August 23, 1268 and in part because of his army's concern with plunder lost the battle. (Adapted from an on-line article at histclo.com)
There is an online account of the battle here . The battle was fought in the Piani Palentini near Scurcola Marsicana, rather than at Tagliacozzo itself. 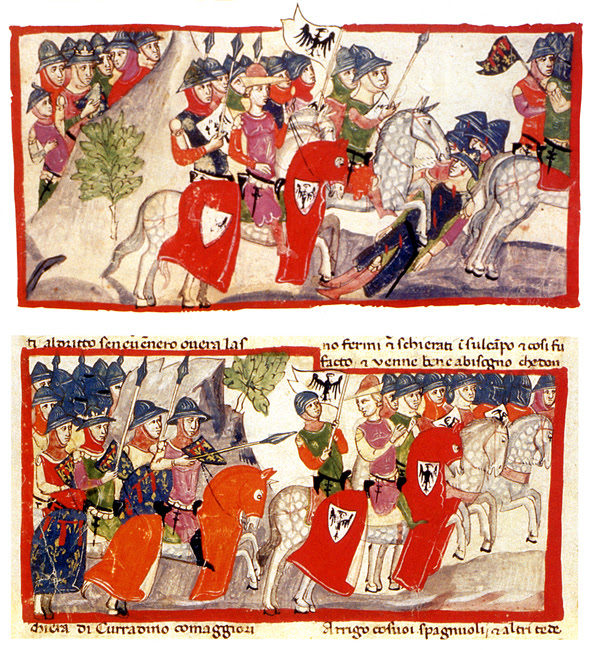 Conradin is the figure in violet with the peaked cap signifying his rank. In the first scene Charles of Anjou watches as the army led by his rival  passes by, and pursues them in the second one.

Image: worldofdante.org
The defeat of Conradin's plan and his ultimate fate - to which I shall return in October - confirmed and consolidated Angevin control over the southern kingdom until the Sicilian Vespers of 1282 divided the kingdom between the mainland and the island, leading to two claimants to the title of King of Sicily, and ultimatelty the nineteenth century term of the United Kingdom of the Two Sicilies. That however lay far ahead in 1268 when the Hohenstaufen dream finally was defeated at Tagliacozzo.