An Irish version of the Royal Arms


The arms of the Kingdom of Ireland as used from its designation as such in 1541-2 have been, with a varient of gules three harps or used during part of the reign of Queen Elizabeth I, azure, a harp or stringed argent, which appears to derive from a thirteenth century precedent, as explained here.  From the time of King James I there was also a crest of a tower with a white hart issuing from it - possibly references to Dublin Castle itself and to King Richard II's visits to Ireland.

This coat of arms, often crowned rather than with the crest appeared on buildings in Dublin and elsewhere in the period before the Union of 1800-01. Since 1603 the Irish arms have been quartered in the Royal Arms as borne by the Sovereign, together with the arms of the English and Scottish Kingdoms  - there is an illustrated outline history of these arms here.

Unlike Scotland Ireland did not have an officially recognised version of the Royal Arms appropriate to itself which gave precedence to the kingdom. This tradition was recovered or reasserted in Scotland  for the visit of King George IV, and can still be seen both in shileds of arms and the tabards of the Lord Lyon and his Court. In Ireland, by contast, and presumably as a consequence of the long dependency of Ireland upon the English Crown the English version of the Royal Arms was used on shields and for the tabards of the Ulster King of Arms and his assistants.

However there were attempts to produce an Irish version. I have seen, many years ago, in a book on Dublin a photograph of a painted fanlight with the Royal Arms depicted with the Irish quarter first and fourth, England in the  second and Scotland in the third, and I am told by a friend that a similar shield is to be seen on one of the banks in Belfast. A third example is on the reverse of a pattern double florin for use in Ireland produced to mark Queen Victoria's visit in 1900 - this has four seperate shields for the three kingdoms, and two of them are Irish.

When the Irish Free State established its own seals in the 1930s, the "Fob Seal" used on letters of credence  varied the British arms by having the harp in two quarters - this is of course from the era of the External Relations Act prior to 1949.

If the constitutional settlement of Ireland had worked out differently during the twentieth century I can imagine that an Irish version of the Royal Arms might well have been adopted and used when appropriate. Recently I found this rather handsome version of the arms, although I would marshal England in the second quarter and Scotland third, and not as the artist has here with Scotland in the second and England in the third quarter. That notwithstanding it is a fine piece of work, and looks very handsome with the collar of the Order of St Patrick encircling it: 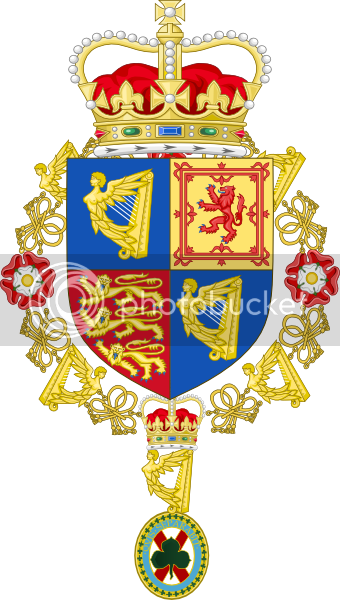 There are other design possibilities from a heraldic enthusiast in Northern Ireland about such an achievement of arms here.