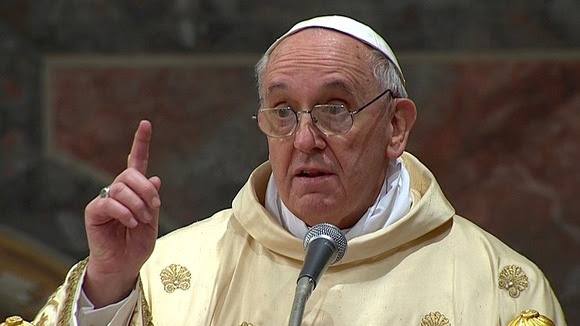 In the 48 hours since his election as Pope was announced there have been formal congratulations to Pope Francis, much comment on what his election means or portends, theories as to the style and tone of his papacy, studies of how the bloc of reformers and that of curialists cancelled one another out in the Conclave leading to his emergence as the surprise (to the outside world at least ) choice, even an interview with his girlfriend of more than half a century ago.

Much of the comment has been very positive in the press and online as well as on television. A friend has pointed out to me two favourable assessments which lay stress on the Pope's Jesuit formation which can be read here. One is by George Weigel, well known as an interpreter of Pope John Paul II, the other from Fr Fessio SJ, the founder of Ignatius Press and very much a voice of the pontificate of Pope Benedict XVI.

In both his homily at the Mass Pro Ecclesia in the Sistine Chapel and in his address to the College of Cardinals the new Pope paid tribute to the work of his predecessor, and this all points to continuity of approach.
The speed of the Conclave and the choice of a cardinal few expected has contributed to the slight feeling of unreality and uncertainty; as Fr Blake pointed out with customary sagacity on his blog, this partly arises from the circumstances of the abdication of Pope Benedict - we have not mourned him as might normally be expected for abeloved Pope before the election of his successor.
There have also been critical, even hostile, voices. This included the post, and its further expansion, on Rorate Coeli about the way in which Summorum Pontificum was implemented in the diocese of Buenos Aires under Cardinal Bergoglio. That said a  friend pointed out that in his early days as pontiff Pope Benedict was also attacked for not doing more for the traditionalist cause by bloggers.

On Thursday evening one friend was very put out by what he had seen of the Mass celebrated by the new Pope in the Sistine Chapel. He saw it as undoing, a rolling back, of all of Pope Benedict's renewal of customary liturgical practice, with, as he saw it, polyester vestments and just two candles at one corner of the forward altar. This sounded very worrying I must admit, but I looked online at photographs and video and found that my friend must have been genuinely mistaken in some of what he had seen. Certainly there was a forward altar, as there had been in 2005, but the lay out was as encouraged by Pope Benedict and the vestments ones I had seen him photographed wearing.I do rather doubt if they are polyester.

The 'Benedictine' arrangement of the altar

There has also been raking over the past in respect of the Pope's actions in Argentina in the years of military rule before 1982. This I gather comes from a particular radical journal, and is inevitable for any public figure from a country with as unsettled a political history as has Argentina.

The British press has found a particular local difficulty for His Holiness in respect of this country, and tat lies in anumber of statements he has made in relatively recent years about the Argentine claim to the Falklands when he has spoken at requiems for the dead of the 1982 war. That he is a patriot for his own native country should not be cause of criticism, but in terms of relations with the United Kingdom they are unfortunate. They are words which have become hostages to fortune, and will not help with alrge section of the British public. Time will, predictably, tell on that issue...

And that is just the first two days of the Pontificate...

Your last statement says it all! The Navajos have a saying about not judging anyone until you have walked in his mocassins...
Excellent post as usual and thank you for keeping us abreast (no broadcast telly and local news only here on this Pacific NW island !)