The Year of the Three Emperors 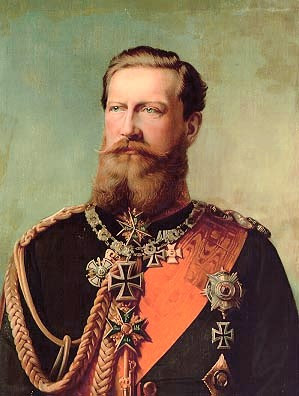 The significance of the short reign of Kaiser Frederick III lies in the debate as to whether or not he might, if he had lived, fulfilled the liberal expectations his ideas had raised and reconfigured the Imperial constitution and perhaps dismissed Bismarck. Opinion, as can be seen in the link above, is divided about this, and indeed as to whether such move smight have helped prevent the moves that led to the First World war in 1914. British writers have often been sympathetic to him, based in part on his marriage to the Empress Victoria, daughter of Queen Victoria and Prince Albert. The Empress, who after his death chose to be known as the Empress Frederick to maintain his continuing influence has also tended to receive approval from writers in the English-speaking world. The vision of a more liberal German Empire they are associated with as a couple may or may not have been realistic. Giles McDonagh's very readable life of their son Kaiser William II is less sympathetic to the couple, suggesting Frederick was rather dominated by his wife, and that she lacked the skills of her mother or eldest brother. It may be that the liberal ideas they supported were noble, but unrealisable, and indeed belonged to some extent by 1888 to an earlier era - rapid industrialisation in Germany in these years had perhaps changed the Empire such that their mid-century romantic German nationalism was now a little old-fashioned. The sense of a missed opportunity hangs over the Emperor's brief reign. This is a story with genuine elements of aprivate tragedy lived out in the public sphere.

This is reinforced by the drawn out misery of his throat cancer, diagnosed the previous year, and which led his wife, after they had attended her mother's Jubilee in 1887 to take the Crown Prince to the Italian Riviera to recuperate, and not back to Berlin. Disputes over his medical treatment as well as his absence from ths ageing father and mounting tensions with their eldest son soured relationships, and it was as a voiceless man that the new Emperor returned to his country after his accession. Despite a valiant effort on his part he was too ill to achieve much, but personal tensions within the Hohenzollerns, their relatives and the public perception of the individuals concerned were reinforced.