150 years ago today the Prince Consort died. A highly gifted man who was not always appreciated by his wife's subjects as he was entitled to be by reason of his abilities and the support he gave her, and who after the Queen's death became something of an image of what was seen as an old fashioned world, it has only in recent decades that his reputation has been recovered and his talents valued. Rather like the Albert Memorial he was an object of wry amusement or even ridicule until restoration occurred to both reputation and monument. It is wonderful to be able to see the latter once again as it was intended, and to take in the craftsmanship and the grandeur of the composition. 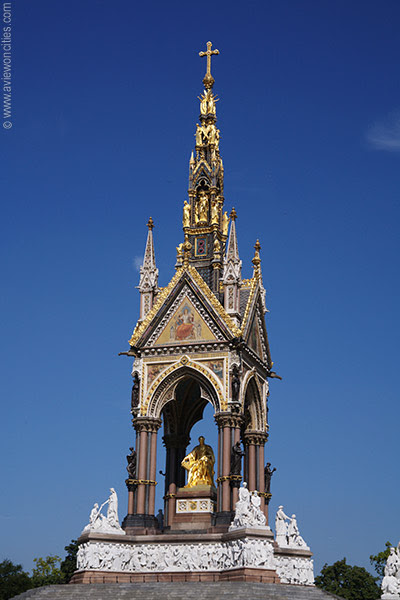 Although the link above questions the story that his statue was painted black during the Great War on the odd sounding notion that its reflection would help German zeppelin raids on the capital - and thinks it was a pre-1914 response to atmospheric pollution which had destroyed the gold leaf - the idea does convey something of the attitude to 'German' Albert.

The restored statue of the Prince Consort on the Albert Memorial

Image: yourlocalweb.cm/Westminster
I think there is something deliberately and unpleasantly offensive in G.K.Chesterton's strictures from 1920 or thereabouts on the Memorial. Writing after visiting Jerusalem the rabidly anti-German GKC considered there was nothing so conspicuous, gilded or gaudy in Jerusalem, and that an Orthoox pilgrim confronted by it would probably hope it was a temple erected to Christ, fear it was to Antichrist and probably recoil with unimaginable perplexity if told that the gilded idol was really "a petty German prince who had some slight influence in turning us into the tools of Prussia."( Dudley Barker G.K.Chesterton p.241).

I see that there is a new book by Helen Rappaport, who I met through St Bede's Hall when it was functioning, which looks at Albert's death and its impact on the Queen, the Crown and the nation.
Magnificent Obsession:Victoria, Albert and the Death That Changed the Monarchy was published last month by Hutchinson, and is a book I would like to find time to read.

Amongst Prince Albert's many achivements is the church at Whippingham on the Osborne estate on the Isle of Wight. Built in 1854-5 and completed in 1861-2 it is the work of the architect A. J. Humbert, but working on the Prince's overall design. The church website is here. What makes the church particularly interesting is the insight it gives into the spirituality of Victoria and Albert. Along with their Mausoleum at Frogmore and the work carried out by the Queen at St George's Windsor, and the number of paintings with a religious theme in their appartments at Osborne. This is not 'Black Protestantism' by any means, and ought to provide for more fruitful academic attention than it has hitherto received - but I will come back to that topic on another occasion.

Meanwhile let us remember the Prince Consort with gratitude for his great achievements - not least the South Kensington complex and his contribution to the development of the monarchy in the nineteenth century.

May he rest in peace.