In addition to St Osmund today is also the traditional feast day of St Barbara - whose cultic recognition was one of the victims of Pope Paul VI's cull in 1969-70. The reason was, I understand, the lack of historical evidence for her actual existence - as with St Catherine of Alexandria. Her very name Barbara suggested a Barbarian origin, and she was expunged as a pious fiction. However reading her story as oulined in the link below I am tempted to say that her story looks very much like that of an 'honour killing', and should not have been so easily dismissed.

In the meantime the long standing devotion to her has not ceased as is mentioned in this online article about her. Maybe, like St Catherine, she will make a liturgical comeback.

She is one of the demoted saints who turns up, complete in her case with artillery piece, in one of Robertson Davies' comic ghost stories in High Spirits - a book which I recommend as I do the rest of his works.

St Barbara in her tower by Robert Campin 1438

The Werl Altarpiece in The Prado Madrid 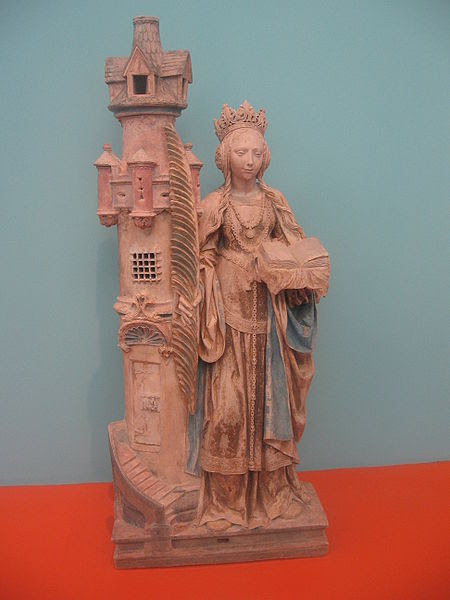 Saint Barbara and her tower,
French, (Villeloup, Aube) circa 1520–30
Statue in polychromed limestone