Today is the feast day of St Lucy, one of the Virgin martyrs who is named in the Roman Canon, and who has enjoyed widespread veneration through the centuries. 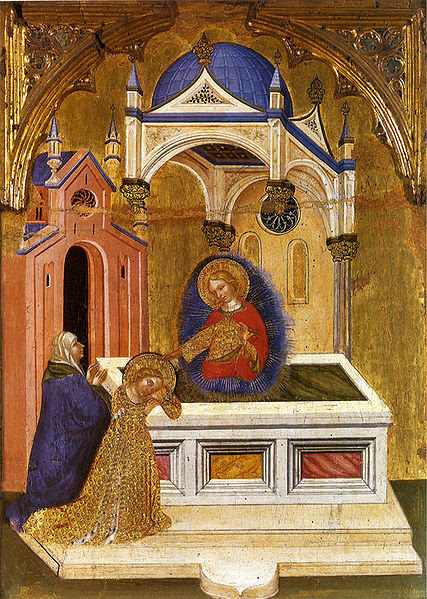 St Lucy and her mother Eutychia receive a vision of St Agatha after praying at her tomb.
A painting of 1410 by Jacobello del Fiore (c.1370-1439).
Civic Museum Fermo

There is a good account of her life and legend here showing how her story and image developed. She continues to be particularly celebrated in Sweden and, as this article on St Lucy's Day shows, that tradition has spread to other Scandinavian countries during the last century. An example of the diffusion and 'invention' of tradition. The article also examines the reasons for the persistence of devotion to St Lucy in a Lutheran country far from the origins of her cult in Sicily.