Today is the centenary of the Coronation Durbar in Delhi of the King-Emperor George V.

There is an online article about the Durbars of 1877, 1903 and 1911 here. I understand from a friend who works on the history of India that the ceremonial was carefully modelled on that of pre-1857 Mughal Imperial enthronements.

There is another about the title Emperor of India here, from which I was interested to learn that the title was used until June 22 1948, ten months after partition and independence, and two years before the present Indian state became a republic. 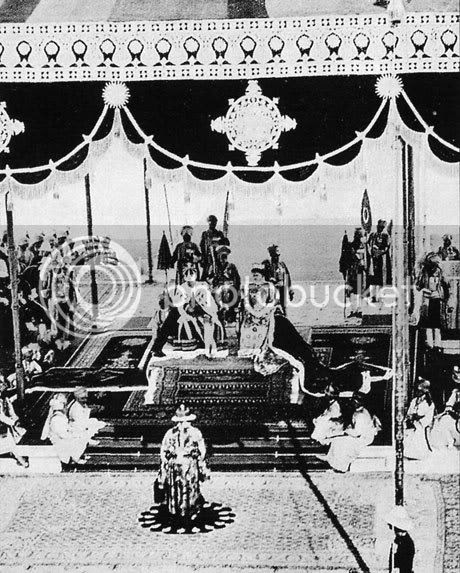 The King-Emperor receiving homage
Image: myspace.com
The two previous Durbars had been held by the Viceroy, but in 1911 the monarch himself was present.

This can be interpreted as part of what can misleadingly be termed the "invention of tradition" at that time. I would prefer to use a term like "recovery of tradition" to describe the process. It is interesting that King george V, by temperament arather retiring man shoul dbe so prominent in this process. Under him the Coronation service was restored to more of its traditional form, St Edward's Crown permanently set with precious stones, the Investiture of the Prince of Wales revived as a public ceremony and held at Caernarvon, the Durbar held by the King-Emperor, the wearing of the Imperial State Crown at the State Opening from 1913 and, later on, at the suggestion of his cousin Princess Marie- Louise, the Royal Maundy once more given by the Monarch in person. This policy has been continued by King George VI - as for example the revival of much of the Order of the Garter ceremonial in 1948 to mark its 600th anniversary - and by the present Queen.

The King-Emperor and Queen-Empress at the Durbar

The presence of the King-Emperor posed a ceremonial problem. As a Coronation Durbar it was fitting for him to wear a crown ansd robes of state. However the Act of Settlement of 1701 forbids the removal from the realm of the crown jewels. As a result a new crown had to be made - there are details about its composition and cost, together with a photograph, here. The government were sceptical about having new crwons across the Empire and it was suggested that after its return with the King to Britain it should be broken up. This was rejected by the King, who considered his Indian subjects would appreciate seeing it alongside the other regalia in the Tower of London.

Then the question arose as to when the King-Emperor should put the crown on. Entering the Durbar arena and putting it on himself would make it a non-religious ceremony, which was opposed by Archbishop Davidson of Canterbury, but a Christian coronation of the ruler of an overwhelmingly Hindu and Muslim empire deemed inappropriate. As a result the King-Emperor entered the Durbar robed and crowned, and the Queen-Empress wore robes and a tiara made for the occasion. This was inherited by the present Queen from Queen Mary, but not used until recent years when it has been worn by HRH The Duchess of Cornwall.

When the funeral of King George V was held in 1936 no place was found for the Indian crown - the second Orb, that of Queen Mary II, placed on Queen Victoria's coffin in 1901 is said to have symbolised her position as Empress of India. By contrast in Austria alongside the Imperial Crown was placed a replica of the Hungarian Crown to symbolise the dual monarchy - and India could be deemed to be analogous.

Following the independence of India and Pakistan and their becoming republics this spectacular crown has remained a museum piece rather than part of the living regalia of the monarchy. However as a crown that is not bound by statute to this realm it could take on the function of one to accompany the Monarch to his or her other realms, either to be worn or carried at State Openings of Parliament. Rather like the 'House-Crown' of the Holy Roman Emperor Rudolph II became the Imperial Crown of Austria after 1804-6 the Indian Crown could take on a new function.

Now that would be an invention or revival, or extension, of tradition - but it would, to my mind, make sense.