The Abdication of King Edward VIII


Seventy five years ago today there occured the abdication of King Edward VIII. At the time it was a profound shock to Britain and her Empire, and remains a subject of fascination, and an event with a continuing legacy for the monarchy. 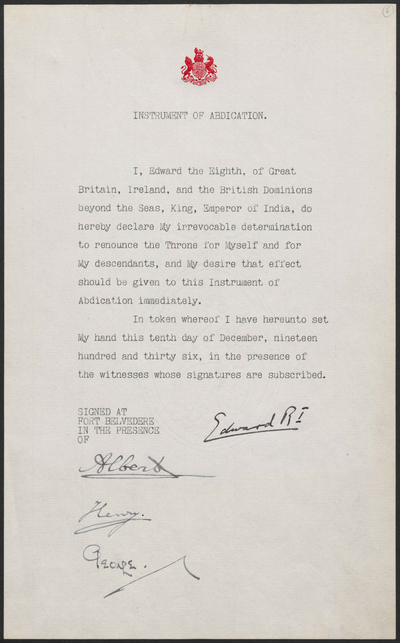 The Instrument of Abdication

Both Crown and subjects were fortunate in that King George VI and Queen Elizabeth were to prove so faithful and conscientious in the exercise of kingship, and to have transmitted that tradition to the Queen and through her to the next generations.

There have been many accounts of the abdication crisis which make for interesting reading, but I was struck by this portrait of the King by his former secretary Sir Alan Lascelles which I found on the internet "Prince Charmless: A damning portrait of Edward VIII".

Lascelles expressed his view of Edward that "for some hereditary or physiological reason his normal mental development stopped dead when he reached adolescence."

There are varying interpretations of the life and character of King Edward VIII and Lascelles' view may not be definitive, even if as a former Private Secretary it tends to the authoratative. There is an interesting similarity to a view I have seen of the other English King who was the eighth of his name* - King Henry VIII has been presented as a monarch whose accession at the age of almost eighteen had the effect of stunting his development - not that he was not intelligent, but that he stopped developing emotionally. An interesting, if coincidental, similarity perhaps - and in both cases matrimonial difficulties were to follow.

* In reality there have been eleven English Kings called Edward and nine called Henry (ten if you are a Jacobite) - there are three Kings Edward before the Norman Conquest, and Henry The Young King 1170-83 as co-ruler with his father.